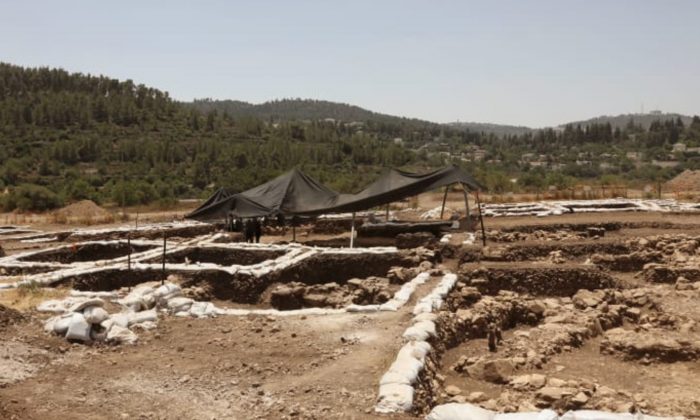 A photograph taken on July 16, 2019 shows a partial view of a settlement from the Neolithic Period (New Stone Age), discovered during archaeological excavations by the Israel Antiquities Authority near Motza Junction, about 5km west of Jerusalem. (Gali Tibbon/AFP/Getty Images)
archaeology

A huge Stone Age settlement unearthed outside Jerusalem may have been home to 3,000 people, the Neolithic equivalent of a large city, according to details released by the Israel Antiquities Authority on July 16.

Believed to have been inhabited 9,000 years ago, the site has yielded thousands of tools and ornaments, including arrowheads, figurines and jewelry. The findings also provide evidence of sophisticated urban planning and farming, which may force experts to rethink the region’s early history, said archeologists involved in the excavation.

The discovery was made near the Israeli town of Motza, about three miles west of Jerusalem. Although the area has long been of archeological interest, excavation director Jacob Vardi said the sheer scale of the site—which measures between 30 and 40 hectares—only emerged in 2015 during surveys for a proposed highway.

Archeologists have since found a large collection of buildings just below the ground’s surface. As well as private homes, the excavation revealed the remnants of public facilities and spaces used for rituals and burials.

Describing the site as the largest of its kind “not just in Israel but in the Southern Levant,” Vardi said in a phone interview that the settlement would have been home to 2,000 and 3,000 people, adding: “In comparison to other settlements (from that time), it’s like a very big city.”

The structures suggest that plaster was widely used, while alleyways between buildings point to a comparatively advanced urban planning, Vardi said.

Elsewhere, storage sheds were found to have contained legumes, such as lentils, implying intensive agriculture at the site. And although the discovery of thousands of arrowheads showed that the inhabitants still hunted, unearthed animal bones also point to sheep husbandry.

Flint tools, knives and axes for felling trees were among the various tools uncovered. The site also provides extensive evidence of the inhabitants’ production of jewelry and art, with discoveries including stone bracelets, medallions, bracelets and figurines.

Other unearthed objects suggest that inhabitants enjoyed trade or contact with the outside world. Sea shells from the Mediterranean and Red Sea were among the discoveries, as was obsidian—a type of volcanic glass—from Anatolia, in present-day Turkey.

Large-scale settlements from this period—and earlier—are known to have existed in the wider region. Archeological finds at Tell es-Sultan, the ancient city of Jericho, date back to between 10,000 B.C. and 8,000 B.C.

Until now, however, the oldest “significant remains” in Jerusalem were from a 7,000-year-old site recently uncovered in the city’s north. The discoveries at Motza predate these by some 2,000 years.
According to Vardi, the newly excavated site may change experts’ understanding of life in the region during the latter stages of the Stone Age. In particular, he said it disproves theories that settlements of this size only existed on other bank of the Jordan River or in the Northern Levant region.

“The claim was that the area of Judea, and the areas surrounding Jerusalem, were empty—that it was a big void,” he said. “There were also claims that, during this period, Neolithic societies were in decline and that the villages were becoming smaller. But what we found in Motza turns a lot of these previous conceptions upside down.

“The discovery is a real game-changer,” he added. “An area that was supposed to be empty wasn’t—it was very vibrant.”

Work on the highway is expected to begin shortly, although the Israel Antiquities Authority said that efforts were being made to document the findings before work commences.

“In preparation for the release of the excavated area, the entire site was documented using advanced 3D technology that will enable research of every detail digitally,” it said in a press release. “It is important to know that significant percentages of the prehistoric site around the excavation are preserved.”