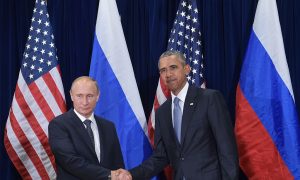 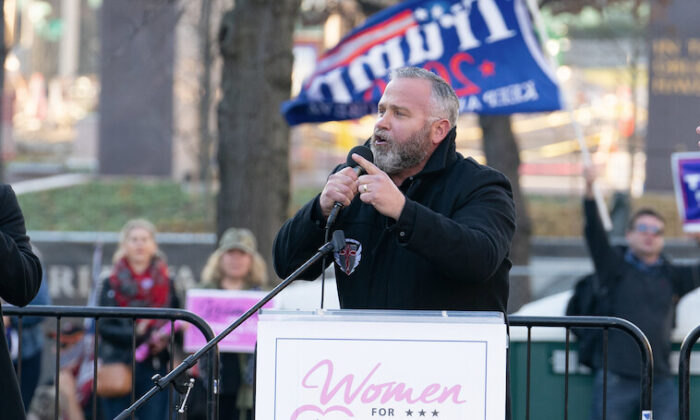 WASHINGTON—Pastor Brian Gibson joined a bevy of religious leaders and thousands of rallygoers in Washington on Dec. 12 to petition the government for fair elections and to show support for the president.

“I believe the wicked men have stolen the American election, and patriots and the people of God are going to rise up,” Gibson told The Epoch Times.

“This is totally a ‘We the People’ moment. And I’m telling you, if American men don’t start acting like American men, we’re going to have to live our lives like Chinese men under communist control. So it’s a pivotal moment. It’s good versus evil. And it’s not Republican versus Democrat. It’s American versus communist.”

Gibson has churches in Texas and Kentucky and through his organization, PG.Today, he’s helped get churches reopened during various pandemic-related shutdown measures across the country.

“They close us down, we go in and put the strength into pastors to open them up,” he said. Gibson said his organization helped 5,000 churches reopen against governors’ order during the first three weeks of shutdowns earlier this year.

“The men and women of God will not have our First Amendment rights trampled. This is not Iran. This is not North Korea. This is not China. This is not Vietnam. This is America and patriots are going to stand up for the Constitution,” he said.

The court system has now weighed in on several church-related cases of shutdown orders conflicting with First Amendment rights. On Dec. 15, the U.S. Supreme Court struck down pandemic-related limits on attendance at houses of worship in New Jersey and Colorado, in two separate lawsuits. Two weeks earlier, the court ruled 5–4 that New York Gov. Andrew Cuomo’s pandemic-related restrictions on attendance at houses of worship likely violated the U.S. Constitution.

California Superior Court Judge Gregory Pulskamp delivered a stinging rebuke of Gov. Gavin Newsom late on Dec. 10, ruling against “all COVID-19 restrictions that fail to treat houses of worship equal to the favored class” of businesses such as Walmart and movie production houses.

‘The Heartbeat of America’

“It is difficult for me to believe that Joe Biden had more African American votes than former President Barack Obama,” Burns told The Epoch Times. “For me, that says, ‘How in the world did that happen?’ Some hidden collusion took place.”

Burns believes there is a battle playing out for the foundation of the United States.

“This is not at all about Democrat versus Republican. This is literally about the heartbeat, the soul of America—the essence of what the United States of America is,” he said.

Burns sees Trump as the face of a growing conservative movement that stands behind the Constitution and is ready to defend against the attacks on it.

“We will not let America die. This is literally good versus evil,” he said. “And the Bible says that there has come a day where right becomes wrong and wrong becomes right. And I believe we’re under attack right now.”

‘Biggest Choice of Our Lifetime’

Pastor Greg Locke of Global Vision Bible Church in Nashville, Tennessee, had spent the past two weeks on the road with the March for Trump bus tour before finishing in Washington.

Locke said the current election battle is the most pivotal moment he’s ever seen in political history.

“Because everything’s at stake, we’re one election away from losing it all,” he said.

Americans are facing the biggest choice of their lifetime and Locke says the choice is between “traitors and patriots.”

“That’s it. Traitors and patriots—figure out what side you’re on,” he said.