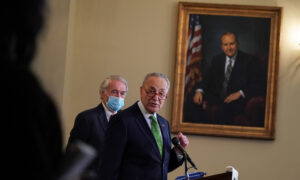 Schumer: ‘Nothing Is Off the Table’ If GOP Moves to Confirm Supreme Court Nominee
0 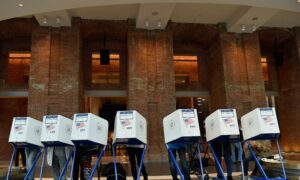 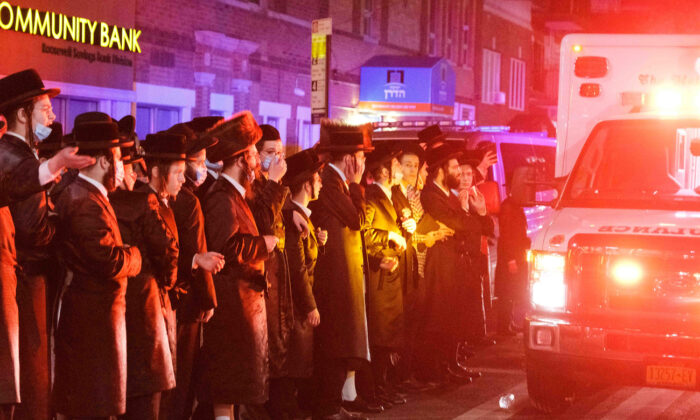 The new lockdown rules, dubbed the “New Cluster Action Initiative,” are being enacted in designated COVID-19 hotspots in Brooklyn, Queens, and Broome, Orange, and Rockland Counties, Cuomo’s office announced on Oct. 6. The measure takes effect on Thursday for a minimum of 14 days.

The Agudath Israel of America—an umbrella Orthodox Jewish organization representing rabbis—and the Roman Catholic Diocese of Brooklyn had their lawsuits filed in federal court in Brooklyn. Both lawsuits are seeking to block the enforcement of Cuomo’s new order.

The Agudath Israel of America and its allies (pdf) are seeking an injunction against Cuomo’s latest executive order, which calls for a 10-person limit to attend places of worship in areas with a high density of cases deemed as a “cluster.” Many of the areas of concern in Cuomo’s order are home to large populations of Orthodox Jews.

The lawsuit argues that the new lockdown rules have imposed “selective and discriminatory gathering restrictions on houses of worship,” and have violated the Free Exercise Clause of the First Amendment, which forbids states from enacting laws inhibiting the free exercise of religion.

The restrictions in Cuomo’s order “singles out and discriminates against all houses of worship—and synagogues in particular—by imposing occupancy and gathering restrictions that make it impossible for Orthodox Jews to comply with both their religious obligations and the Order,” the lawsuit stated. It noted that Cuomo had announced the order shortly prior to three Jewish holidays on Oct. 9, 10, and 11 that would involve adherents gathering at synagogues.

In the other lawsuit, obtained by TheTablet.org, the Roman Catholic Diocese of Brooklyn said in its lawsuit that the new restrictions violate American’s First Amendment rights.

“The executive orders this week have left us with no other option than to go to court,” Nicholas DiMarzio, the Bishop of Brooklyn, said in a statement to the New York Post. “The State has completely disregarded the fact that our safety protocols have worked and it is an insult to once again penalize all those who have made the safe return to Church work.”

The complaint said that Cuomo’s orders will “effectively force over two dozen churches within the Diocese of Brooklyn to close their doors, even though those churches have been reopened for months in strict adherence to all medical and governmental guidance, without any COVID-related incidents whatsoever.”

“Effectively closing the doors of the church again now would be devastating to the community, and would grossly infringe on the First Amendment rights of Catholics in the affected areas of Brooklyn and Queens,” it also read.

Cuomo’s office did not immediately respond to The Epoch Times’s request for comment.

“We’ve been sued virtually every day for every action taken,” Rich Azzopardi, a spokesman for Cuomo, said in a statement to the Wall Street Journal. “We’re concentrating on reducing the virus in these hot spots and saving lives, period.”

In one of the affected lockdown areas, the Borough Park neighborhood of Brooklyn, hundreds of residents including those from the Orthodox Jewish communities protested for a second night in a row on Wednesday. Some among the crowd were seen waving flags in support of President Donald Trump. No arrests have been made over the two days, according to police.

Under the new lockdown rules, areas with a high density of cases deemed as a “red” zone or a “cluster” would see schools and non-essential businesses closed.

Mass gatherings would be prohibited and attendance at places of worship would be capped at 10. Restaurants would only be able to serve takeout. Areas further away from the cluster would have progressively lighter restrictions.

Brooklyn Chamber of Commerce President Randy Peers opposed Cuomo’s order, saying in a statement, “To shut down almost all of south Brooklyn and punish small businesses that have reopened safely will be an overwhelming setback to the borough’s economic recovery.”

New York City Mayor Bill de Blasio on Oct. 4 had already announced lockdown measures for parts of Brooklyn and Queens where the rate of positive COVID-19 tests had been over 3 percent for the past seven days. The lockdown measures, which included non-essential businesses and schools, went into effect on Thursday and will last a minimum of 14 days.

Cuomo said on Thursday, “There’s always been opposition to some of these rules but the rules have been proven over time to work. This is still science and math at the end of the day.”

New York City Mayor de Blasio warned those who disagree with the new rules to “still respect the fact that the State and City have made a decision for the health and safety of all.”

“People have and will protest, and we understand that there is a place for peaceful protest, but the NYPD will not tolerate people doing harm to others,” the mayor said on Wednesday.

New York saw heightened numbers of COVID-19 cases earlier in the year but has since witnessed a drop until recent weeks.

Cuomo on Thursday announced that the average rate of positive tests in the top 20 zip codes seeing recent outbreaks is 5.8 percent. The number is 1.01 percent for the remainder of New York State.

“These 20 ZIP codes contained 23.2 percent of all positive cases in New York State yesterday, but represent only 6.2 percent of the state’s population,” Cuomo announced. He noted on Wednesday that there had been a recent uptick in hospitalizations in the 20 zip codes seeing the high infection rate.