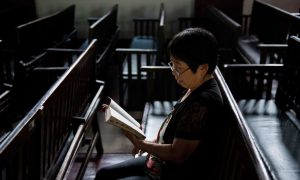 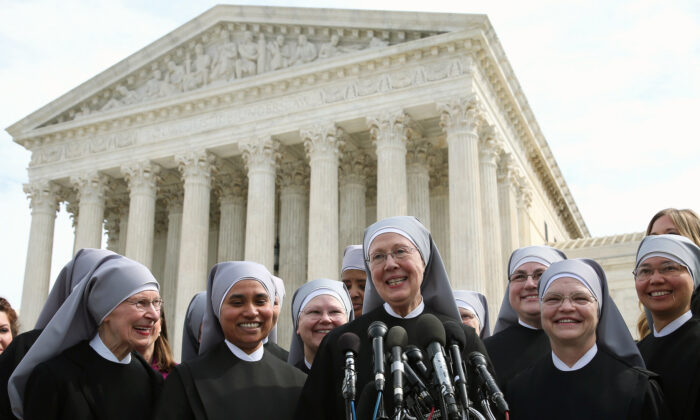 Mother Loraine Marie Maguire, of the Little Sisters of the Poor, speaks to the media after arguments at the US Supreme Court in Washington on March 23, 2016. (Mark Wilson/Getty Images)
US Features

Last month, Attorney General William Barr warned that religious values that have been a bedrock for many American families are coming under increasing attack in the last 50 years.

From facing opposition for displaying religious symbols in public spaces to experiencing harassment for refusing to provide a service that would violate their conscience, some people of faith in the United States say they are facing increased hostility for exercising or expressing their religious rights.

The questions of why this fundamental right enshrined in the First Amendment of the U.S. Constitution is coming under increasing attack and why we should protect it are emerging as important discussion topics in the public consciousness.

Luke Goodrich, an attorney at The Becket Fund for Religious Liberty, tries to address these questions in his newly released book “Free to Believe: The Battle Over Religious Liberty in America.” He told The Epoch Times that it is important to protect religious freedom as it is a fundamental right that is rooted in who we are as human beings.

Why is Religious Freedom Worth Protecting?

One of the reasons Goodrich believes religious freedom should be protected is because it is intrinsically good. He says it affords people the opportunity to find a transcendent truth if they wish to seek it.

Goodrich, who was part of the legal team in a multitude of religious rights cases including the landmark Supreme Court case Burwell v Hobby Lobby, argues that if the government attempts to coerce people on matters of transcendent truth, it goes against people’s nature, violating their human rights.

“[The] core principles that underlie religious freedom also underlie all rather rights—freedom of speech, freedom of assembly, freedom from unlawful search and seizure, [and] freedom from cruel and unusual punishment,” he said.

Goodrich said that by giving the government the power to interfere with religious freedom and violate inherent principles in every human being, it is the same as giving power to the government to “trample all other rights.”

Another point in his defense of religious freedom is that it is beneficial to society. He said by allowing religion to flourish, morality improves, hence allowing people of diverse backgrounds to live together in peace.

“It allows religion to flourish, which helps produce moral virtue, which is necessary for self-betterment,” he argued. “It benefits society by protecting dissent and diversity. And it benefits society by reducing social conflict, finding a way for people of diverse abilities to live together in peace.”

In his speech at the Notre Dame law school last month, Barr raised concerns about how a number of social issues are linked to a “growing ascendancy of secularism” in society. He argued that forces of secularism are using society’s institutions like mass media and popular culture to stifle opposing views, promoting greater reliance on government intervention for social problems, and using our legal and judicial institutions to eliminate traditional moral norms.

Goodrich agrees that religion is facing a threat in the United States but said his view as to why it is the case differs from Barr’s. He argued that the growing religious freedom conflicts boil down to several changing cultural shifts, particularly in the areas of life, sexual autonomy, and the belief in absolute truth. He said that the longheld religious understanding of these crucial issues is increasingly pitted against the values of modern society, leading to friction between the two sides.

He argued that our modern culture has made a distinction between what he calls “good” religion and “bad” religion.

“Good” religion is something modern society has deemed as “good” and acceptable. It is something that is practiced in private, that is it stays in the church or the home and subscribes to modern people’s understanding of tolerance—that is it doesn’t make absolute truth claims or tell other people they are wrong, Goodrich argued.

“It accepts people for who they are and who they want to be,” he said. “That kind of religion is perfectly acceptable in modern culture, and it’s not facing the same kind of religious freedom conflicts.”

On the other hand, “bad” religion is not bad in the proper sense of the word, rather it is something modern society deems as non-acceptable because it is practiced in the public, makes claims on absolute truths, makes moral judgments, especially on questions of life and sexuality, and condemns what it views as sin, he argued. These values are often labeled as discrimination when they conflict with modern values.

“And that particular type of religion is increasingly viewed as a threat to modern culture,” he said. “There are lawsuits and state and local governments that are seeking to punish it and minimize it.”

Goodrich said this is why the First Amendment is so important, as it makes no distinction when protecting people’s right to exercise their religion, but he added that this right is not without limitations.

“The limits come from the government’s duty to protect other rights and if religious freedom is violating other fundamental life rights, like the right to life, right to property, that is where restrictions on religious freedom are justified,” he said.

Meanwhile, Goodrich added that a contributing factor to the increase of attacks on religious freedom is that religion is playing a less important role in the daily lives of Americans.

Similarly, Nathan A. Berkeley, the communications director of the Religious Freedom Institute (RFI) in Washington, said in an email to The Epoch Times that they believe the decline in religious devotion is one of the contributing factors in the rise of hostility encountered by people of faith. The RFI is an organization that is committed to achieving broad acceptance of religious liberty as a fundamental human right, the cornerstone of a successful society, and a source of national and international security.

Berkeley said the decline of religious devotion and the push for secularism affect perceptions of what religion is and how it’s “free exercise” contributes to the well-being of American democracy and the common good. He said fighting for religious freedom in such an environment presents challenges, especially in the area of education.

“Across America’s high school and college campuses, religious freedom is often misunderstood, ignored, or thought to be irrelevant,” Berkeley said. “Confronted with rampant secularism and the rise of hot-button social issues, especially since the 1980s, America’s youth have turned inward in their search for truth.”

Berkeley said as a result young people are focusing more on individual autonomy, something he said actually undermines the very social good that young people claim to support.

“This framework of belief also advances a view of religious freedom as an abrogation of individual autonomy and basic human rights,” he added.

Meanwhile, Goodrich said that although culture has shifted in significant ways and the legal system is beginning to reflect more modern values, his hope is that the government would be able to adopt compromise solutions that would let individuals on both sides of the argument live according to their deeply held values.

“My hope would be that and the arguments that we’re making in court are that the government doesn’t have to pick one side of the cultural disagreement about sexuality or life or religion and crush everyone who disagrees,” he said.