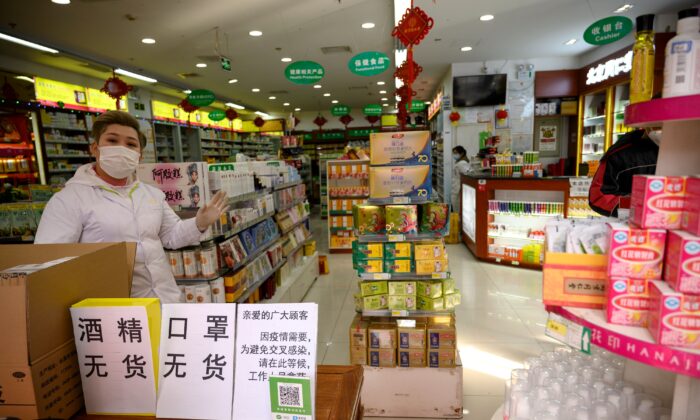 Employees wear protective face masks at a pharmacy in Beijing on Feb. 1, 2020. (NOEL CELIS/AFP via Getty Images)
US News

Reliance on China for Medicine Is a Security Threat to US Military and Public, Says Congressman

WASHINGTON—The coronavirus outbreak has disrupted the U.S. pharmaceutical industry’s global supply chain that is largely dependent on China, calling attention to a dangerous level of dependence by the United States on this global competitor.

China is the dominant supplier of thousands of medicines found in U.S. homes and hospitals, from antibiotics to chemotherapies, from HIV/AIDS drugs to antidepressants to painkillers.

This makes the United States vulnerable to supply chain disruptions arising from the coronavirus (officially known as COVID-19) outbreak in China, which has alarmed Congress and the White House.

The increasing dominance of Beijing in the manufacturing of medicine poses a national security threat to the United States, Rep. John Garamendi (D-Calif.) told The Epoch Times.

“We are totally dependent on China—certainly the American military is, the American public equally so,” he said.

“That is not a good thing to have any country really dominating and having a monopoly on a key, in this case, drug or set of drugs that are essential to maintain human life.”

The United States is heavily dependent on either drugs that are sourced from China, or drugs made from ingredients manufactured in China. Crucial medical drugs outsourced from China include penicillin, heparin, and medications essential for surgeries.

Beijing could easily leverage this dependence to gain military, economic, or political advantage over the United States.

To address this issue, Garamendi and Rep. Vicky Hartzler (R-Mo.) introduced in October 2019 a bipartisan bill, “Pharmaceutical Independence Long-Term Readiness Reform Act.” The bill would require the Pentagon to assess the threat posed by the dependence on China and to only purchase U.S.-made ingredients, medicines, and vaccines for the military.

The Chinese regime is the major developer of generic drugs (prescription drugs that have gone off-patent), which accounts for nearly 90 percent of pharmaceuticals.

Although the bill only protects service members, Garamendi believes it will help revive the U.S. industrial base to produce generic medicines and antibiotics domestically, since the military is a significant purchaser of pharmaceuticals.

“We want the Pentagon to buy American-made drugs, which creates a market for American manufacturers to invest and to produce the necessary drugs.”

The COVID-19 outbreak, which originated in the central Chinese city of Wuhan and has rapidly spread across China, is expected to hit China’s economy.

To contain the virus, many local governments in China have halted factory activities, impacting the pharmaceutical and other industries. At the same time, the country faces its own shortages of medical supplies and equipment needed to treat and test for the virus.

The United States’ dependence on China for medicine has been a problem for years, and the coronavirus outbreak has exacerbated the problem, according to Rosemary Gibson, a senior advisor at the Hastings Center, a bioethics research institute, and co-author of “China RX: Exposing the Risks of America’s Dependence on China for Medicine.”

“It’s unbelievably worse if we have an outbreak here in the United States,” she told The Epoch Times.

China supplies thousands of ingredients used to make essential medicines, she said, including those to help care for people who have COVID-19.

“I’m hearing privately that some companies are not getting products [from China],” Gibson said. “And many health care organizations in the United States are preparing for supply disruptions.”

Due to the outbreak, the U.S. Food and Drug Administration (FDA) recalled its inspectors and staff from China. This would create a quality problem for drugs that are being imported from China, Gibson said.

Beijing’s “Made in China 2025” strategy has clearly laid out plans to dominate and control certain key sectors globally, including the pharmaceutical industry. Through massive government subsidies and a large pool of talented chemists, China has managed to advance its capability in this sector and drive Western manufacturers out of the market.

“We have essentially allowed the Chinese to weaponize their pharmaceutical industry against the United States,” Hartzler said in a statement.

“This is a very real issue with grave concerns—not only for our national security, but for the health of all Americans.”

The White House has also sounded alarms about China’s dominance in the global supply chain of generic drugs.

White House trade advisor Peter Navarro said on Feb. 12 that the fallout from the coronavirus outbreak was a “wake-up call” for the United States to reduce its dependence on China.

Navarro, in an interview with The Financial Times, said the United States needs to examine its reliance on imported drugs, face masks, and vaccines and get production back onshore.

Sens. Marco Rubio (R-Fla.) and Chris Murphy (D-Conn.) on Feb. 6 wrote (pdf) to Stephen Hahn, commissioner of the FDA, asking if the agency had the “necessary tools to ensure the safety and supply of pharmaceuticals, food, and medical supplies imported from China.”