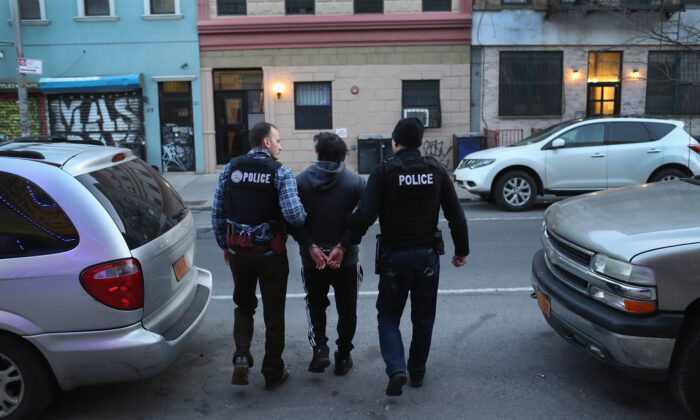 Immigration and Customs Enforcement (ICE) officers arrest an undocumented Mexican immigrant during a raid in the Bushwick neighborhood of Brooklyn on April 11, 2018. (John Moore/Getty Images)
By Matthew Vadum

Releasing immigration detainees from custody based on unsupported suspicion that they might be exposed to the CCP virus while incarcerated unnecessarily exposes Americans to great risk, a panel discussion by the nonpartisan Center for Immigration Studies (CIS) heard.

There are reportedly almost 40,000 individuals in U.S. Immigration and Customs Enforcement (ICE) custody, and activists want them released, ostensibly to reduce their exposure to the contagion. In recent weeks, federal judges across the country have been releasing ICE detainees on the theory that they are safer outside detention centers from the CCP virus, often called novel coronavirus.

Another seven detainees there were voluntarily released by ICE, which has a contract with Hodgson and other sheriffs in the state to hold arrested detainees at county jails. The former detainees were ordered to self-quarantine and are under house arrest, local media report.

“Ironically, of my 850 detainees/inmates, we have had no COVID-19 cases since the pandemic began, and this judge is releasing these detainees under a ‘humanitarian’ claim,” Hodgson said.

“I can think of nothing more inhumane than letting dangerous people wander around our neighborhoods, based on a claim that maybe, just maybe, they could contract COVID-19 in the detention center.”

Torres released from detention 10 immigration detainees in New Jersey with underlying health conditions thought to put them at great risk if they contracted the virus. The suit was brought by a left-wing group called Brooklyn Defender Services.

In her order, Torres referenced a CNN report from March 20 that warned of a “tinderbox scenario” as the virus spreads to immigration detention centers, and the resulting “imminent risk to the health and safety of immigrant detainees” and the public.

The online panel discussion came April 13 after protesters in Arizona called for detainees to be freed.

“Detainees deserve to be housed in safe, healthy facilities,” said Andrew Arthur, a CIS resident fellow in law and policy and former immigration judge at a detention facility.

“But policymakers must compare their situation in the facility to their safety outside of the facility, and the availability of treatment inside to that outside of the facility. And who should be making these decisions? What if a single judge says to empty the jails and detention centers completely? Judges should not be controlling policy in this manner.”

“Policymakers must also remember that detention often serves public safety, because most of the aliens taken into detention are convicted criminals,” said Dan Cadman, a CIS fellow and retired official with ICE and its predecessor agency.

“Once released, most of these individuals will re-offend.”

The irony is that, given the high hygienic standards in ICE detention facilities, detainees are safer from the virus on the inside than on the outside, he said.

“If they do contract the virus, they are going to tax the local system in ways that they don’t if they’re kept in detention. And while that may not seem like a lot, let me put it in a really harsh context here. Doctors throughout the country have said that they are so stressed in their systems that they may have to make hard choices about who to let live and who to let die.”

If a physician is confronted with having to choose between a young released detainee and your elderly relative, “how are you as a citizen going to feel to think that someone who was ordered released by a federal judge someplace gets preferential treatment over your elderly parent or grandparent?”

The all-Democratic Massachusetts delegation to the U.S. Congress, both House and Senate members, the sheriff said, sent a letter saying county jails were unhygienic and lacked basic items such as soap, as part of a campaign to free illegal aliens from detention.

These politicians “have chosen to use this pandemic, sadly, as a foundation to continue launching this progressive agenda to release ICE detainees, and to not hold people accountable, i.e., the people who chose to violate our immigration laws, and instead put the onus on law-abiding citizens.”

“These members of Congress ought to be ashamed of themselves. I responded and told them so,” Hodgson said.