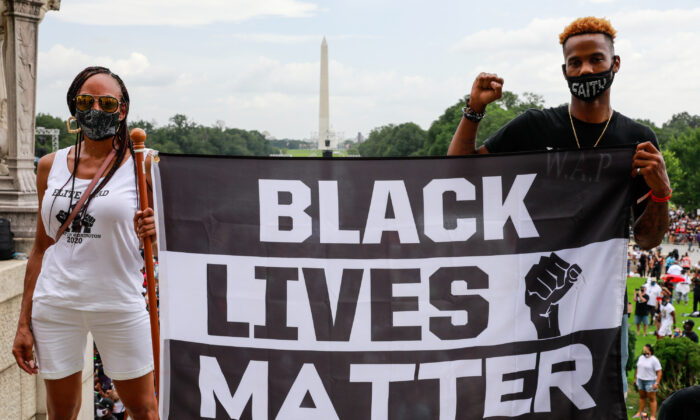 Protesters hold a sign in support of Black Lives Matter during the Commitment March in Washington on Aug. 28, 2020. (Natasha Moustache/Getty Images)
Crime and Incidents

The city’s police chief, Eric Winstrom, said the case would come down to the test of “whether deadly force was needed to prevent death or great bodily harm to the officer.”

“To avoid any conflict of interest, the investigation will be conducted by the Michigan State Police. I will have no access to that investigation,” Winstrom said. The officer has been placed on leave with pay and has been prohibited from engaging in any police work during the investigation, according to Winstrom.

The footage, from a dashcam, bodycam, cellphone, and a home surveillance camera, captured what began as a traffic stop and escalated into a deadly confrontation.

On the morning of April 4, Patrick Lyoya, 26, of Grand Rapids was pulled over by a police officer whose name hasn’t been released. Winstrom said the male officer has served in the Grand Rapids Police Department for seven years.

During the traffic stop, police dashcam footage shows Lyoya exiting the car that he was driving, leaving an adult male passenger inside. Lyoya didn’t heed the officer’s instructions to get back into the car and instead remained standing in the middle of the street.

Footage from the dashcam and the officer’s bodycam shows a heated discussion that turned into a scuffle. Lyoya broke away from the officer and tried to run away through several nearby yards. The officer pursued him on foot. A couple of lengthy wrestling matches ensued with the two men rolling around on the ground in two of the yards.

As the officer attempted to handcuff Lyoya, he refused to comply and struggled to grab the officer’s Taser. In the melee, the device appears to discharge twice, each time striking the ground and hitting no one, according to Winstrom.

The footage shows that, as the two went on grappling, Lyoya repeatedly ignored clear commands from the officer to let go of the stun gun and stop resisting.

As the wrestling continued, the officer put Lyoya face-down on the ground and drew his weapon, while shouting, “Drop the Taser!” Lyoya was shot once in the head.

“A Taser has potential to do great bodily harm,” Winstrom said, responding to a question from reporters.

Winstrom said the license plate on the car that Lyoya was driving was registered to another vehicle.

“A mismatched plate is not a felony,” he said.

Winstrom called the incident “an absolute tragedy, heartbreaking. … I view it as a traumatic experience, a progression of sadness.”

A former 20-year veteran of the Chicago Police Department in his first year working in Grand Rapids, Winstrom said he hoped that the “community would show love to the Lyoya family.”

The Lyoyas are part of a growing and thriving Congolese community, with members who fled the revolution and the Ebola epidemic and were resettled in the Grand Rapids area mostly by the Obama administration.

Winstrom thanked the Congolese community in Grand Rapids for its patience and calmness.

Since the shooting, there have been several small peaceful protests in downtown Grand Rapids over the alleged excessive use of force during the incident.

Throughout downtown Grand Rapids, a number of public buildings have been barricaded and many store windows have been boarded up as a precaution.

The city of about 200,000 people is about 150 miles northwest of Detroit. The downtown area suffered significant damage during the violent riots following the death of George Floyd in the spring of 2020.