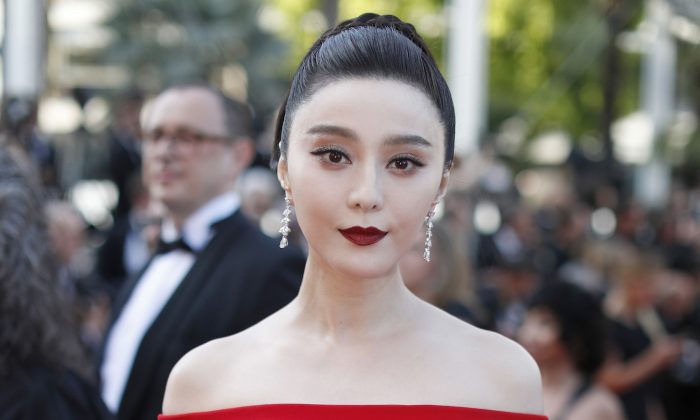 Fan Bingbing poses for photographers upon arrival at the screening of the film The Beguiled at the 70th international film festival, Cannes, southern France on May 24, 2017. (Thibault Camus/AP)
Social Issues

BEIJING—The director of “Air Strike,” featuring Chinese actress Fan Bingbing, says the film’s release has been canceled in the wake of her disappearance and conviction on tax evasion charges.

The World War II thriller, also starring Bruce Willis and Adrien Brody, was to have been released Oct. 26.

However, director Xiao Feng posted on his Weibo miniblog on Oct. 17 that it was “time to let go” after eight years of work on the film.

Chinese tax authorities this month ordered Fan and companies she represents to pay taxes and penalties totaling $130 million, ending speculation over the fate of one of the country’s highest-profile entertainers three months after she disappeared from public view.

Fan and other famous actors have been signing so-called “yin-yang” contracts, one of which sets out the real terms, while a second—with a lower figure cited—is meant for tax officials.

Fan has starred in dozens of movies and TV series in China and is best known internationally for her role as Blink in 2014’s “X-Men: Days of Future Past,” a cameo in the Chinese version of “Iron Man 3,” and for star turns on the red carpet at Cannes as recently as May.

Before her disappearance, she had been booked to star with Penelope Cruz in the Hollywood film “355.”

Fan posted an apology on her official Weibo account saying that she accepted the tax authorities’ decision and would “try my best to overcome all difficulties and raise funds to pay back taxes and fines.”

“I am unworthy of the trust of the society and let down the fans who love me,” she wrote in her first update of her Weibo.com microblog since June 2.

Fan’s disappearance coincided with a crackdown by Chinese authorities on high salaries for actors that can eat up much of the cost of a production. In June, regulators capped star pay at 40 percent of a TV show’s entire production budget and 70 percent of the total paid to all the actors in a film.

Punishment for a high-profile, A-list star such as Fan was taken as a stark warning to others in the industry. One of Chinese Communist Party’s security agencies even published an article titled, “This absolutely is not simply aimed at Fan Bingbing alone.”

The State Administration of Taxation (SAT) has stepped up enforcement: it announced that companies and individuals in the entertainment industry who voluntarily pay back taxes evaded prior to Dec. 31 will be exempt from administrative punishment and fines, according to a Xinhua report.