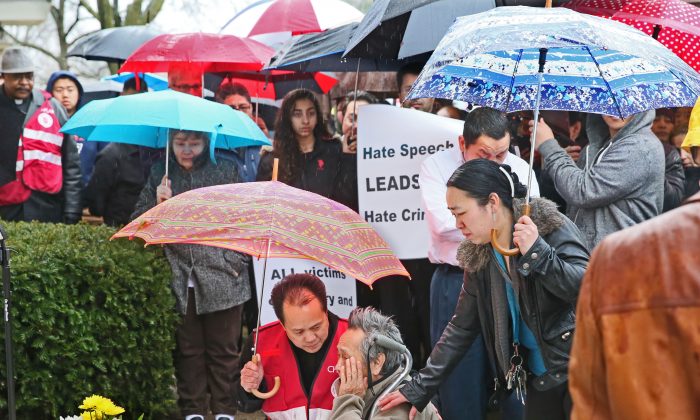 An man is assisted by members of the Vue family, as he weeps in the rain in front of a memorial for three people who were fatally shot, Sunday, March 13, 2016, in Milwaukee. A crowd gathered for a candlelight vigil Sunday evening to remember Jesus Manso-Perez, Phia Vue and Mai Vue, who were gunned down at their apartment complex on Sunday, March 6. (Michael Sears/Milwaukee Journal-Sentinel via AP)
Crime and Incidents

MILWAUKEE—Hundreds of people have gathered in Milwaukee to remember the three people who authorities say were shot to death by a neighbor at their apartment complex.

Popp, according to the criminal complaint, attacked Manso-Perez and his son as they were coming upstairs after putting a load of clothes into the washing machine. Before they went to the basement, the document states, Popp had asked where they were from, to which they replied “Puerto Rico.” Popp, who is white, then said, “Oh, that’s why you don’t speak English,” the complaint says.

When they came back up, Popp was waiting with a long gun, police say. He told the father and son, “You guys got to go,” and shot Manso-Perez, according to the complaint.

Manso-Carrasquillo ran down the stairs and outside, where he alerted people who called 911, police say.

Shortly afterward, according to the criminal complaint, Popp burst into the Vues’ apartment. The family had fled into bedrooms when they heard the shooting, but Popp forced his way inside, led Phia Vue out and killed him, police say.

Popp then started to drag Mai Vue and her two young daughters out of the apartment, the document states. Authorities found Mai Vue dead in Popp’s apartment.

Police, responding to an active shooter call, took Popp into custody without a struggle.

Popp will undergo a competency exam, which his lawyer, Christopher Hartley, requested. Hartley did not return phone and email messages seeking comment Friday.

Milwaukee County District Attorney John Chisholm said his office was “aware of concerns about the people who were targeted.” He added, “we’ll continue to evaluate those issues as the case moves forward.”

The newspaper reports Mayor Tom Barrett extended condolences on behalf of the city during the vigil, and prayers were offered in English, Hmong and Spanish.