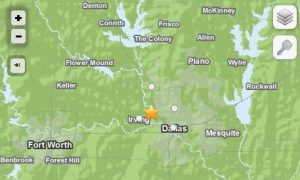 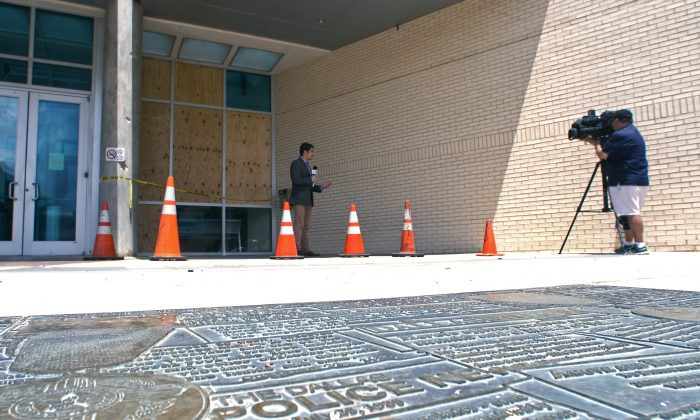 Boarded up windows beside the entrance to the Jack Evans Police Headquarters on S. Lamar provide the backdrop for a television news segment in Dallas, Sunday, June 14, 2015. (Guy Reynolds/The Dallas Morning News via AP)
US

DALLAS—James Boulware told family members that he had foreseen a deadly Japanese tsunami and the Newtown, Connecticut, school shooting in his dreams. Police say he choked his mother. And he seethed at police, blaming them for the lost custody of his son.

Boulware, the man authorities have linked to a weekend shooting outside Dallas police headquarters showed signs of violence and mental instability for years beforehand, according to accounts from authorities and family members.

His brother, Andrew Boulware, told The Associated Press that he and others in the family had tried to get him help, particularly after the 2013 incident in which he allegedly choked his mother, then fled to an East Texas town where authorities and family members thought he might attack schools and churches.

“He never was properly diagnosed,” Andrew Boulware said Sunday. “He could be the nicest guy in the world. He tried to help friends out whenever he could. He was not a bitter person.”

Authorities say it was miraculous no one else was injured in Saturday’s attack, in which the shooter sprayed the front of the building with gunfire just after midnight. After opening fire, the suspect drove an armored van into a squad car, still firing, then led police on a chase to a restaurant parking lot in the suburb of Hutchins.

A police sniper shot the man during a standoff, but it took several hours to confirm his death out of fear that he had loaded his van with more explosives.

Police on Sunday said they had put 14 officers involved in the incident on standard administrative leave pending an investigation.

Two years ago, Boulware was arrested for family violence in Dallas, though the case was later dismissed. According to a Dallas police report, a witness said Boulware was in his mother’s house and “began talking rudely about religion, Jews and Christians.” The report said Boulware then grabbed his mother by the neck for 2-3 seconds until a third person could pull him off. The two men fought until Boulware left the house.

The police report said he was reported later that day to be in Paris, Texas, about 100 miles away, where he grabbed weapons and body armor and talked about “shooting up schools and churches.” Andrew Boulware and his father, Jim Boulware, confirmed the incident.

Andrew Boulware recalled James Boulware claiming he had dreamed about the shootings at Sandy Hook Elementary School in Newtown, Connecticut, and other disasters before they had happened. But he said authorities in Dallas ignored family members’ statements that James was mentally unstable.

“They diagnosed him as sane in 15 minutes,” Boulware said.

James Boulware’s mother, Jeannine Howard, said in a statement to local media that she considered her son “lost to mental health” long before his death.

“We tried to get him mental help numerous times, but the system failed him, because he was declared ‘sane,'” she said in the statement. “He was very delusional. It was very obvious.

“We hope something good can come from this, and that people will reach out to hurting souls around them and unite to build up others, rather than tearing them down,” she added. “We hope that people with mental illness will receive the care they need to avoid situations like this in the future.”

James Boulware lost custody of his son, which weighed on him deeply and caused him to distrust police, his father said.

Man Linked to Dallas Police HQ Shooting Had Violent Past

Howard told TV station KDFW that she was granted custody of the child on Monday.

Andrew Boulware said he hadn’t seen his brother since immediately after the March 2013 incident, despite making several attempts to contact him.

“We had tried for two years,” he said. “I didn’t honestly think that he would ever go this far, but it was always in the back of my mind that it was a possibility.”