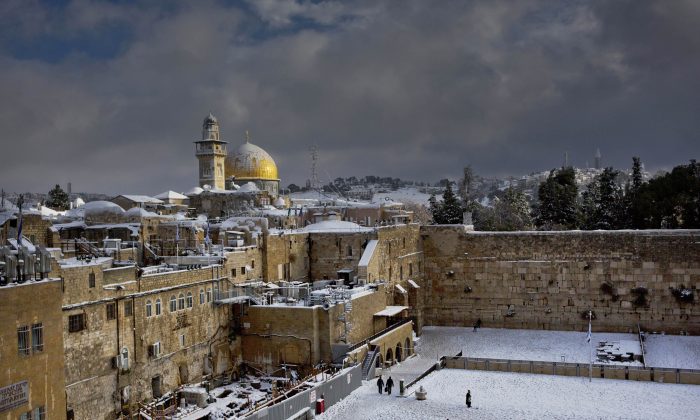 In this Friday, Dec. 13, 2013, file photo, the Western Wall and the Dome of the Rock, some of the holiest sites for for Jews and Muslims, are covered in snow in Jerusalem. (AP Photo/Dusan Vranic)
Middle East

JERUSALEM—Quiet returned to a contentious Jerusalem holy site Wednesday after three days of clashes between Muslims and Israeli forces at the hilltop compound and following a spurt of Palestinian attacks against Israelis that killed one citizen during a Jewish holiday.

Israeli armed forces deployed heavily at the entrance to the compound and adjacent to the Al-Aqsa Mosque, where Muslim demonstrators clashed with Israeli forces over the last three days throughout the Jewish new year holiday of Rosh Hashanah. Police appeared cautious not to inflame the situation by getting too close to the mosque.

Fifteen religious Jewish visitors toured the site early Wednesday, accompanied by Muslim authorities who administer the compound and an Israeli officer. The site is revered by both Muslims and Jews and is a frequent flashpoint for tensions. Jews are permitted to visit the hilltop compound but banned from praying there.

Police had entered the Al-Aqsa mosque compound in previous days to disperse protesters who had holed up inside after hurling rocks, concrete blocks and firebombs at officers. The Israeli response sparked condemnations across the Arab world and concern that the tensions could spiral out of control.

“They are all ours and we will not let them desecrate it with their filthy foot,” he said. “We will protect Jerusalem and will protect our Christian and Muslim holy sites. We will not leave our homeland. We will remain holding every atom of soil in this homeland.”

The fate of the compound in Jerusalem’s Old City is a core issue at the heart of the Israeli-Palestinian conflict. It is known to Jews as the Temple Mount, site of the two biblical Jewish temples. Muslims revere it as the Noble Sanctuary, where they believe the Prophet Muhammad ascended to heaven. Non-Muslim visitors are only allowed to enter the site at specific hours and are banned by police from praying there.

Elsewhere in Jerusalem, tensions have been high following the death of an Israel after Palestinians pelted his car with rocks. Several Israeli civilians and police have been injured in attacks by Palestinians this week.

Prime Minister Benjamin Netanyahu convened an emergency meeting Tuesday night where he vowed tougher measures to curb the violence and on Wednesday he visited the site where the 64-year-old Israeli died in his car after being attacked by rock-throwing Palestinians.

“We are changing policy. The situation that exists is unacceptable and we plan to give soldiers and police officers tools to act forcefully against those who throw stones and firebombs,” Netanyahu said. “This rock was one rock too many. We declare war on the rock throwers, the firebomb throwers and the other outlaws.”