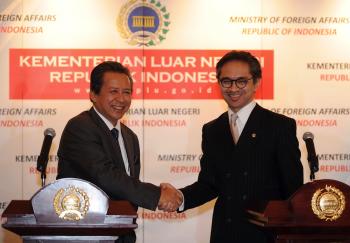 Deputy Minister Kohilan Pillay, said he hoped that the countries would come up with solutions to crude protests last week in Jakarta, and other bilateral matters.

On Aug. 23, an angry mob mostly made up of members of the fringe nationalist group, People's Democratic Front (Bendera), flung human feces at the Malaysian Embassy in Jakarta and smeared the Malaysian flag with refuse, according to the Jakarka Globe.

Tensions between the two countries have been mounting since Aug. 13 when Indonesia arrested seven Malaysian fisherman it alleges were poaching in Indonesian waters. Malaysia then arrested three Indonesian marine officers. Both countries released their prisoners Aug. 17.

On Saturday, Malaysia Minister of Education Datuk Seri Mohamed Khaled Nordin, urged caution on the part of the more than 6,000 Malaysian students in Indonesia, recommending that they take extra care while in public, avoid going out in groups, and avoid public gatherings, according to the Malaysia Star.

Despite sharing ethnic, cultural, and religious identities, both predominantly Muslim countries have long been engaged in disputes over matters such as the treatment of migrant workers, territorial disputes, and more recently, cultural icons.

A controversy erupted two years ago over the use of the Indonesian folk song Rasa Sayange in a Malaysian tourism advertisement. Malaysia apologized for the use of the Balinese Pendet dance, and said the mistake was made by a production house contracted by Malaysia's Tourism Ministry to produce the commercial.