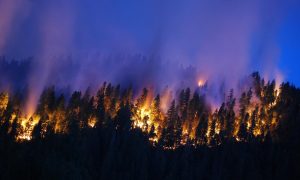 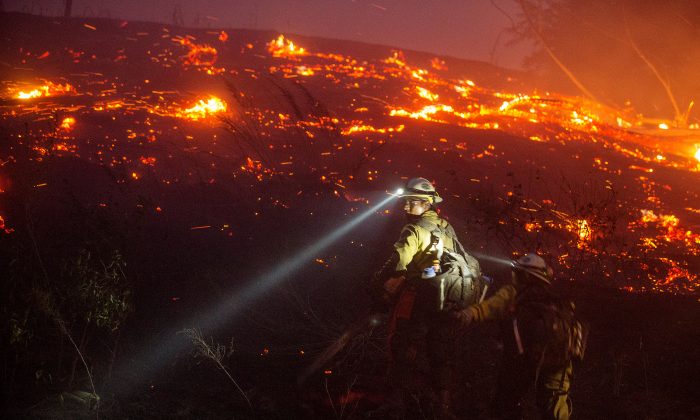 HELENA, Mont.—Firefighters reinforced by additional manpower, equipment and an elite management team attempted to check an uncontained wildfire tearing through Montana’s Glacier National Park, while the growth of a blaze outside California’s wine country slowed enough to allow some evacuated residents to return home.

Both fires have been feeding off tinder-dry conditions in the drought-ravaged states. Strong wind gusts pushed the Montana blaze through Glacier’s conifer-topped ridges, and erratic winds only compounded the problems firefighters in Northern California had in scrambling through the steep, brush-choked terrain.

In Montana, a management team that responds only to the nation’s highest-priority fire took command Thursday night, two days after the wildfire ignited. The blaze has swept down the eastern side of the scenic Going-to-the-Sun Road, the park’s most popular roadway, toward the St. Mary community on the park’s eastern boundary.

More than 200 firefighters backed by helicopters and fire engines planned to attack the blaze’s northeast flank, which was the biggest threat to a hotel and campground that was evacuated Wednesday, and to find a safe place to begin constructing a fire line, fire information officer Jennifer Costich said.

Some visitors left the region or diverted to different parts of the park after seeing smoke rising above ridge tops. Others wondered whether to cancel their upcoming trips, leading officials to note that only a small part of Glacier’s 1,718 square miles have been closed, and most of its top attractions on the east and west sides are still open.

St. Mary Glacier Park KOA owner Susan Brooke said she sent her staff to safety, but she and her family are staying. Firefighters marked which of her cabins to save and planned to use the pool to fight the flames if the blaze moves closer to the community

“There’s not much you can do about it but keep people calm,” Brooke said. “The guys, the firefighters, are good about keeping us in the loop about what’s going on.”

The fire had charred more than 6 square miles and destroyed Baring Creek Cabin, a historic backcountry structure. It also torched one abandoned car and closed 21 miles of the 50-mile Going-to-the-Sun Road. Nearly 700,000 people visited the park in July last year, and about 95 percent of them traveled some length of the roadway.

Meanwhile, a wildfire that has burned through 10 ½ square miles of drought-parched country side in the Napa area calmed enough that many residents were allowed to return to previously threatened homes, officials said.

Evacuation orders were called off for some 50 of the 200 evacuated homes as firefighters stunted the growth of the blaze Thursday night, said Amy Head, state fire spokeswoman.

“The threat has diminished pretty substantially in a lot of areas,” Head said. “We didn’t have a lot of growth today, which is good.

More than 520 firefighters battled the wildfire in treacherous terrain less than an hour’s drive from the popular wine country.

Bryan Campbell said he remained hopeful that his brother’s ranch was still standing Thursday after the wildfire forced them and their neighbors to evacuate 85 horses.

“All we can have is a good attitude toward it,” he said. “As long as the winds don’t pick up, we’re hoping everything will be fine.”

Authorities said the cause of the California fire, which ignited Wednesday near Lake Berryessa, remains under investigation, but there were no reports of damage or injuries.

A new fire that broke out Thursday afternoon that shut down a highway linking Sacramento and Reno, Nevada, and brought a handful of evacuations, the U.S. Forest Service said. The blaze was 5 percent contained.

A wildfire also is raging in southeastern Washington state, where crews were working Thursday to prevent it from reaching a watershed that provides drinking water for the city of Walla Walla.

The fire has burned one home and more than 8 1/2 square miles, leading to evacuation orders for several dozen homes in two rural areas. The fire was human-caused, officials said.