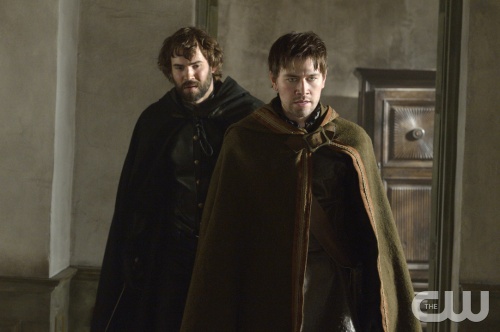 Rossif Sutherland as Nostradamus and Torrance Coombs as Bash in the season 1 finale of Reign. (Ben Mark Holzberg/The CW)
Entertainment

Reign season 1 is nearing the end, meaning the finale is almost here.

Episode 22, bearing the ominous title “Slaughter of the Innocence,” is set to air on May 15.

The official description says that the King’s madness and cruelty reaches a fevered pitch, prompting Mary and Francis to take action. “Their brutal choices could change the course of history, but an unforeseen terror brewing in the woods could cost them, and their friends, everything.”

Meanwhile, Mary makes a drastic decision when she learns Lola is going through a life-threatening labor at a location outside of the castle.

Leading up to the finale, Kenna falls for Bash and is successful at getting him to fall for her, executive producer Laurie McCarthy told TVLine.

She added that the finale packs “an incredible payoff and a shocking ending for Mary and Francis [as well as] Bash and Kenna.”

“The king’s madness will also escalate in a shocking way. All of those events will come together — including the culmination of what we used to call ‘the thing in the woods’ — in a very surprising, dramatic end.”