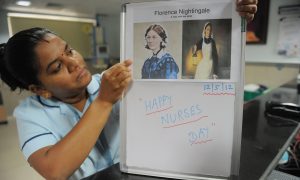 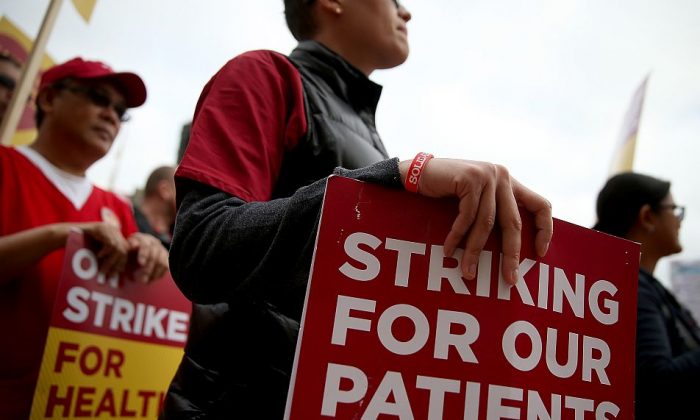 Nurses carry signs as they strike outside of Kaiser Permanente hospital on November 11, 2014 in San Francisco, Calif. Registered nurses (RN) have decided to go on strike in fourteen U.S. states for being on the frontlines of caring for potential Ebola patients while their demands for greater safety are not met. (Justin Sullivan/Getty Images)
US

Registered nurses (RN) have decided to go on strike in fourteen U.S. states for being on the frontlines of caring for potential Ebola patients while their demands for greater safety are not met. So far, 400 RNs from Providence Hospital in Washington, D.C. are going on strike, and 18,000 RNs will go on strike nationwide, according to the National Nurses United (NNU) website.

The NNU announcement touches on the demands that are most crucial for people that are responsible for Ebola patients. One is that the protective equipment include a full-body hazmat suit that meets all American Society for Testing and Materials F160 standards, as well as training on how to put on and take off the suit.

The RNs are fighting for their safety because they “are now being asked to put themselves in harm’s way unprotected, unguarded … we are done talking and ready to act,” said Rose Ann DeMoro, Executive Director at NNU.

All the nurses are asking for is interactive training and protective gear for not only RNs, but also healthcare workers that might come in contact with Ebola patients.

Corporate hospitals and health services are on top of the list of health care facilities that are screaming and kicking against implementing protective gear for the nurses. For example, Kaiser Permanente “has chosen to protect its bottom line,” said DeMoro.

“One thing that perhaps they have failed to realize … if they let us die, they also let the patients die,” said an RN, who asked not to be named.

She continued, “Ebola is an equal-opportunity killer. It doesn’t care about the bottom line and it doesn’t care about secrecy or intimidation tactics either.” She said that these tactics are employed by hospital administration during any emergency. It is just like do as I say or we will ruin your future.

“Physicians, nurses and other medical staff who are the first line of defense against the spread of Ebola are not always adequately protected from the virus,” said a recent Scientific American article.

RNs state that they understand that cash-stripped hospitals are cutting corners whenever possible. However, when it comes to protecting those on the front-line from contracting a deadly disease, the hospitals need to put cost considerations aside. The need to put pressure on hospitals is apparent. They must agree to provide adequate protective gear, not only for Ebola, but also for future contagious diseases.

“Proper training and equipment as well as an abundance of caution are necessary, given the lack of experience health care and cleanup workers have in dealing with Ebola,” said the Scientific American article.

Pew addresses a number of issues that are important to the Ebola containment. First, state and local health agencies are on the frontline because of their responsibility for the public laboratories that test the virus, disseminating the information to hospitals and searching for anyone that had contact with Ebola patients.

Secondly, the U.S. Centers for Disease Control and Prevention (CDC) issue guidelines that cover recognition, screening, isolation and diagnosis. But, the CDC does not control the containment effort, a task relegated to the states. In general, the CDC will provide assistance when needed.

The disease is contagious, but it is only transmitted through body secretions. One also has to be in close contact with someone that shows the specific symptoms, which include diarrhea, vomiting, and severe weight loss.

The virus is transmitted through human or animal body fluids. It is not spread via air, and “The chances of Ebola becoming airborne are extremely small,” according to the Wellcome Trust blog.

Ebola was discovered in 1976 and has not mutated since its discovery in the Sudan and the Democratic Republic of Congo. It takes about 3 weeks before the symptoms become apparent and about seven weeks after the symptoms disappear before one no longer is infectious.

A number of scientists and health care officials believe that Ebola could be similar to the HIV or Polio virus; both have not disappeared, but have been contained in Western countries, given the existing health care structure.

The Ebola outbreak has not turned into a worldwide epidemic. At this time, the future outcome of this latest contagious disease appears to be uncertain.

“The reaction to a handful of Ebola cases in the U.S. is so far shaping up to be an overreaction,” said an article in the Scientific American.

The article suggests that this overreaction could, if not contained, turn into “stress beyond what is warranted or healthy.”