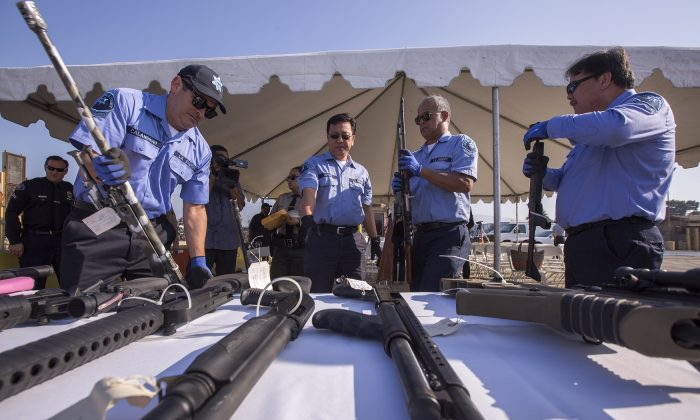 Deputies handle some of approximately 3,500 confiscated guns to be melted down at Gerdau Steel Mill in Rancho Cucamonga, Calif., on July 19, 2018. (David McNew/Getty Images)
US News

Registered Gun Owners Double in California Since 2012, Even as State Toughens Regulations

California has more than 2.5 million gun owners registered as of Jan. 1, according to the state’s Justice Department. That is about double the number in 2012.

The number of gun owners has been increasing by about 6-15 percent a year despite the state’s ever-expanding regulation of gun ownership.

In 2008, there were about 2.5 registered gun owners per 100 Californians. By the end of 2018, it’s increased to nearly 6.3 per 100, based on the department’s “Armed and Prohibited Persons System” annual report (pdf), as well as population estimates released by the state and worldpopulationreview.com.

The number isn’t quite an accurate depiction of gun ownership, as there are also many undocumented gun owners in the state. It does, however, provide a solid measure of legal gun ownership.

California has some of the strictest gun laws in the country, with waiting periods, background checks for private sales, magazine capacity limits, open carry restrictions, and mandatory firearm registration.

Starting July 1, a new law will require ammunition be sold only to an individual whose information matches an entry in the state’s gun registration database and who is eligible to possess ammunition, with some exceptions.

The increase in firearm owner registrations in California follows a broader trend of gun ownership in the country.

It’s not clear though how long the phenomenon persevered. The Trump administration moved on Dec. 18, 2018, to ban bump stocks, which allow semi-automatic rifles to fire almost as rapidly as automatic ones. At least some gun rights advocates opposed the ban.

Accidental firearm discharges killed 486 people in 2017, down more than 50 percent since 1997, according to mortality data collected by the Centers for Disease Control and Prevention.