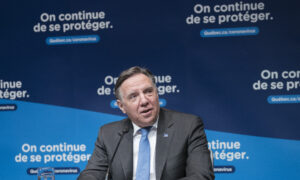 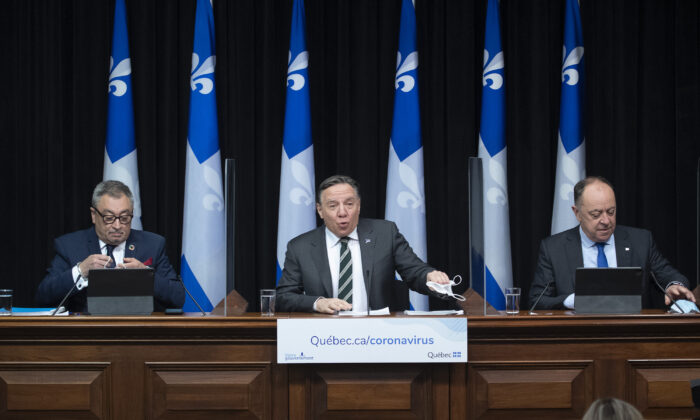 Regions in Quebec Back Under Strict COVID-19 Restrictions

Quebec Premier François Legault announced special measures on Wednesday that will put four regions back under strict COVID-19 restrictions, while three other cities will have what amounts to a lockdown order.

The premier said the infection rates in three other cities—Quebec, Lévis, and Gatineau—have been growing “exponentially,” and will therefore go under a 10-day lockdown, also starting on Thursday at 8 p.m. and last until April 12.

The curfew in these three cities will be pushed forward from 9:30 p.m. to 8 p.m. This means businesses considered essential, such as grocery stores, will have to close at 7 p.m.

Legault said “non-essential” businesses will be closed down as they were in January, will restaurants open only for takeout, delivery, and drive-through orders. Places of worship will also be limited to a capacity of 25 people.

The premier promised that the government will bring back financial programs to support the affected businesses.

While day cares and other childcare services will remain open, parents are advised to keep their children at home if possible, to avoid contact.

On Tuesday, Legault said a fifth region, Saguenay-Lac-St-Jean, was concerning, but he said the situation in the area has now stabilized.

Legault said the situation in Montreal remains stable, with about 300 to 350 cases per day in the past month. He said while the rules in Montreal will not change for the time being, but people should not take it for granted, as it could also “explode” at any time.

When the frequent changes in restriction measures were criticized as a “yo-yo effect,” the premier defended his decision saying that the situation is changing quickly with variants of the CCP (Chinese Communist Party) virus on the spread, pointing to the situations in France and in Ontario.

“If we had not wanted to take any risks, we would have closed more in Montreal, and we would have made a mistake, because for the time being we’ve been able to give a bit of breathing room to the people in the Montreal area,” Legault said. “But are we going to have to act next week in the greater Montreal area? Perhaps.”