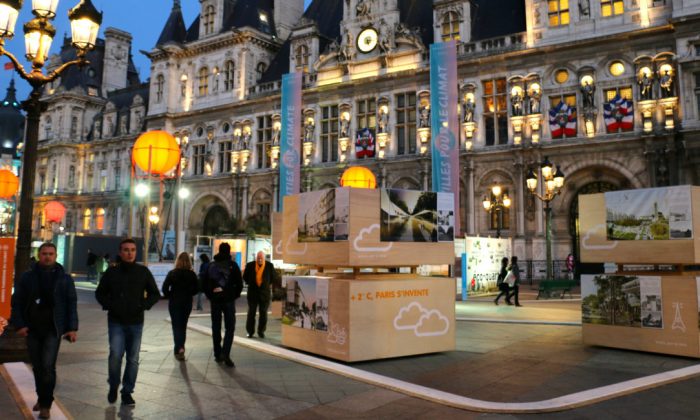 PARIS—Competing national interests and even personal rivalries have cast a cloud over the international summit on climate change meeting here, and the issue of “climate justice” has proven to be a significant stumbling block in the way of any meaningful deal.

At various points during the two-week conference, realpolitik took over, overshadowing the summit’s larger objectives.

“You don’t come into these negotiations and negotiate them in a vacuum,” Steven Groves, a senior research fellow at The Heritage Foundation, told The Daily Signal in an interview. “You really can’t separate out what’s going on geopolitically. And no countries come into this process altruistically. There’s this veneer of trying to save the planet, but it’s all talk.”

A total of 150 leaders and delegates from 195 countries gathered in Paris for the international summit on curbing the effects of climate change only weeks after Islamic State terrorists killed 130 and wounded hundreds across the city. It was called one of the largest gatherings of world leaders in history.

Organizers heralded the summit, sponsored by the United Nations and named COP21, as a historic opportunity for the global community to collectively address what some argue is the world’s No. 1 problem—climate change.

“Nearly 200 nations have assembled here this week, a declaration that for all the challenges we face, the growing threat of climate change could define the contours of this century more dramatically than any other,” President Barack Obama said during remarks on the summit’s opening day, Nov. 30.

As the summit wound down Friday, delegates went into overtime to piece together a global deal on greenhouse emissions, with provisions included for verification and enforcement that would limit the global temperature rise to no more than 2 degrees Celsius (3.6 degrees Fahrenheit) by the end of the century.

That target since has been tightened to 1.5 degrees Celsius, or 2.7 degrees Fahrenheit, after a group of Pacific island nations declared that anything more was an existential threat due to rising sea levels.

While COP21 officially ends Friday, a final draft of the summit agreement was not expected until Saturday morning, Dec. 12, according to those familiar with the discussions.

“I wouldn’t say the negotiations have been sidetracked, but hit the same hard walls these conferences have faced in previous years,” Nick Loris, senior policy analyst on energy issues at The Heritage Foundation’s Roe Institute for Economic Policy Studies, told The Daily Signal. “I’d say it has been wildly successful in demonstrating the failures of international climate negotiations.”

When Ukrainian President Petro Poroshenko took to the podium in Paris to give remarks on the summit’s opening day, he focused on calling Russia out for its invasion of eastern Ukraine.

“The terrible events that France experienced this tragic November are a daily reality for Ukraine for almost 21 months,” Poroshenko began, referencing the Nov. 13 terrorist attacks in Paris.

He went on to outline the environmental impact of the war, including poisoned drinking water from flooded mines and pollution from exploded ammunition.

“My country became the object of hybrid warfare,” the Ukrainian president said. “The hybrid warfare, which results in hybrid consequences. They may be less visible but are still very damaging. One of them, the risk of environmental disaster in the eastern part of Ukraine—the Donbas.”

Poroshenko’s speech ruffled feathers among some journalists at home and abroad. In an editorial published Dec. 4 in the Kyiv Post, Gulliver Cragg, a British journalist who works for the French television station France 24, wrote: “This was not the time or the place to put so much emphasis on Russia’s war in Ukraine. The COP21 environment summit is a hugely important event for the whole world. Ultimately, the fates of far, far more people than 45 million Ukrainians could depend on the outcome of these talks.”

Cragg’s editorial was in response to an earlier piece in defense of Poroshenko’s remarks by the Kyiv Post’s publisher, Brian Bonner. He wrote, “Russia’s Vladimir Putin, who unquestionably leads a powerful nation, shows no respect for human life, rule of law or rules of war. This is also akin to terrorism.”

The terrorist attacks were France’s worst mass casualty event since World War II. And since April 2014, the Ukraine war has killed 9,115, including the 298 passengers and crew of Malaysian Airlines Flight 17. The war also has displaced more than a million people, according to the U.N.

While the flap over Poroshenko’s speech was tangential to the COP21 summit, the use of the venue and its publicity to highlight regional disputes was not exclusive to the Ukrainian president.

On Nov. 24, one week before the Paris summit began, Turkey downed a Russian Su-24 attack plane over Syria, claiming the Russian jet had violated its airspace—an assertion the Kremlin later denied.

Tensions between Russia and Turkey were almost at a tipping point as the climate summit opened, and Russian President Vladimir Putin and Turkish President Recep Tayyip Erdogan both used press briefings in Paris to engage in a verbal sparring match over the crisis.

The delegation of the Tibetan government in exile used COP21 to highlight grievances with China. The Tibetan delegates said China’s destruction of pastures on the Tibetan plateau had almost wiped out Tibetan nomad culture, and that nuclear waste dumping and mining for substances like uranium ore in Tibet had created an environmental catastrophe.

“Tibetans must have a say on what happens to their land,” Lobsang Sangay, prime minister of the Tibetan government in exile, told The Daily Signal in an emailed statement.

The Tibetan plateau is the watershed of Asia’s six largest rivers, which supply fresh water to one-third of the world’s population.

Paris was on security lockdown as COP21 began, and the opening day was marred by protests in central Paris that riot police broke up with tear gas. Two weeks later, a state of national emergency persists because of the attacks.

And while many world leaders touted the Paris climate summit as a display of global resolve in the wake of the Nov. 13 Paris terrorist attacks, the actual international war effort against the Islamic State has been much more fractured.

Consequently, the climate talks in Paris have also provided a meeting ground for a flurry of behind-the-scenes negotiations about military efforts in Iraq and Syria. Obama met with Putin for 30 minutes, reportedly discussing the fate of Syrian dictator Bashar al-Assad.

And after the first day of the summit, Obama joined French President François Hollande for dinner at an exclusive French restaurant. The topic of conversation, according to news reports, was military operations against ISIS in Syria and Iraq.

Despite the war on ISIS and the pall of the Nov. 13 terrorist attacks, the greatest hurdle for delegates in Paris has been the objectives of the summit itself.

The target of 2 degrees Celsius, the central objective of the talks, has since been debunked in various news reports as a spurious target.

“Hell is not going to break loose at 2 degrees—it will take hundreds of years to unfold,” said Carlo Jaeger, chairman of the Global Climate Forum, a German think tank, according to a Nov. 29 Wall Street Journal report.

And debates on “climate justice” are the sticking point for any meaningful outcome. The demand from developing countries that richer nations should pay them for protecting the environment has devolved into what some negotiators and analysts have claimed is a grab for development capital.

Heritage’s Loris said: “I’ve seen a lot of definition of climate justice floating around, but broadly speaking, it’s an attempt to alleviate or to reduce the burden that those most disadvantaged by climate change face. The saddest part is that the policies climate justice groups are putting forward are going to hurt those that they’re aiming to help the most.”

India has been a lead voice in the climate justice chorus, pushing for what it calls “reparations” for the environmental damage done by the world’s richest countries.

“The climate change summit is just an extension of the effort of the G77 for more redistribution of the ill-gotten gains that they say richer countries got from carbon,” Groves said.

While much of the climate justice language had been dropped from successive drafts of the final agreement, Groves said, developed countries like the United States would likely agree to concessions for the sake of producing an agreement, which can be labeled as a success to voters back home: “The notion of climate justice is not dead[.] … The U.S. and other developed countries are just looking to pledge enough money to get them through Paris. Right now it looks to me like the U.S. team is going to get the deal it wants.”

Historic Pact to Slow Global Warming Is Celebrated in Paris

Describing the outcome of the two weeks of negotiations, Loris said: “Yet again, there’s no commitment from rapidly developing countries like China, India, Brazil, and others to curb carbon dioxide emissions. And the developing countries have shown their hand that they want a lot of money, which Congress has almost no appetite to fund.”

Many developing countries remain committed to prioritizing economic growth, improving living conditions, and increasing access to water and energy over implementing costly environmental protection protocols, he said: “Secretary Kerry hit the nail on the head. Even if all of the industrialized nations reduced their carbon footprint to zero, it still won’t matter. Why should the U.S. be part of a scheme that will drive up energy prices on American families and businesses for no climate benefit?”