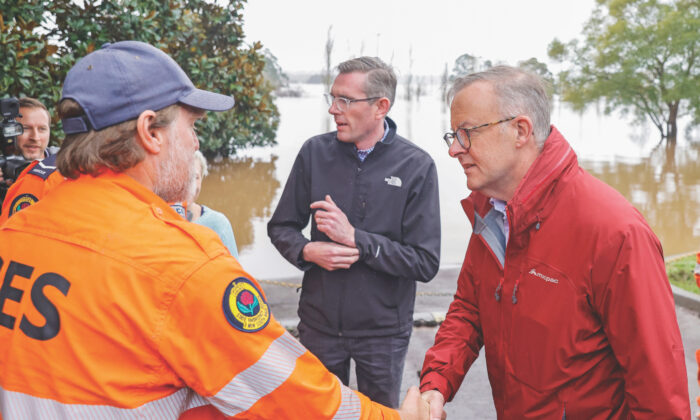 Regional towns in the Australian state of New South Wales are bracing for more rain and flooding after major rivers broke their banks, inundating rural areas and sparking flood rescues.

The State Emergency Service said water reached five low-lying houses at Gunnedah, in the state’s northwest, on Sunday, when the Namoi River peaked at just over eight metres.

There was major flooding downstream at Wee Waa, where the river peaked at 6.86 metres, though a levee kept water from reaching town.

Farmers in the region are likely to be cut off due to wet, unsealed roads and emergency services are on call to deliver supplies.

Minor flooding hit Wellington and Narromine along the Macquarie-Wambuul River and forced the evacuation of the Dubbo caravan park on Friday.

The Bureau of Meteorology has issued a flood warning for that river, with the peak expected to reach Warren on Monday evening.

Burrendong Dam, which is on the river near Wellington, is at 132 per cent, having sunk below four per cent at the height of the drought.

SES spokesman Greg Nash said there were early predictions of up to 40mm falling across the state from Tuesday evening, prompting more flood warnings.

“We’ve already got saturated ground, so rivers and creeks are rising much quicker,” Nash told AAP.

“Anybody who lives around a river or creek system or a catchment area needs to be mindful, aware of the conditions, and keep up to date with the forecasts.

“We really want people to be prepared to have an evacuation plan and be ready to go.”

There have been 37 flood rescues in western NSW since September 9, the majority involving people driving through flood water.

“It is very dangerous,” Nash said.

“Just because you drive on the road for the daily run to school or work doesn’t mean it’s safe to drive through again.

“Flood water can damage the road, it can expose utilities, expose pipes, and, in some cases, there is sewage in the water.

“If people come across flood water, they should stop, turn around, and find another way.”

Sarah O’Keefe, from the Gunnedah Rotary Club, said residents rallied to help a farmer move his sheep to safer ground on Sunday morning.

“Everyone was wading in the water to rescue the sheep,” O’Keefe said.

“You check on all your neighbours, the same thing happens in town.”

She said there were concerns about the predicted rain as some residents had just finished repairing their homes and businesses after floods in November.

“I’m sure everyone in those low-lying houses have their sandbags ready for this week.

“There’s not much more you can do.”