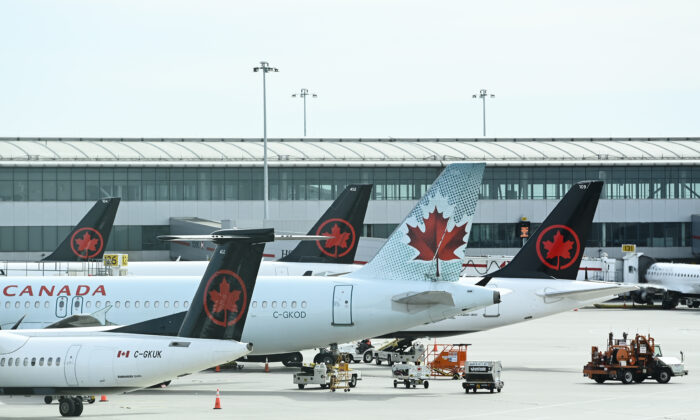 Air Canada planes sit on the tarmac at Pearson International airport during the COVID-19 pandemic in Toronto on Oct. 14, 2020. (The Canadian Press/Nathan Denette)
Companies

Regional airlines are demanding immediate action from Ottawa to prop up the beleaguered sector, but reject the idea of a federal stake in carriers.

John McKenna, president of the Air Transport Association of Canada, says the government has not responded to requests for cash over the past six months, leaving Canada as the only G7 country to hold off on pledging major financial aid for an industry devastated by the COVID-19 pandemic.

“God, no, we don’t need a stake in airlines? The cost controls would be incredible,” said McKenna, whose trade organization represents some 30 regional airlines.

“We need liquidity, no interest-loans, maybe forgivable loans? because fixing is a lot easier than replacing.”

Intergovernmental Affairs Minister Dominic LeBlanc left the door open to a bailout, including the purchase of airline shares by Ottawa, in an interview with CTV’s Question Period on Sunday.

LeBlanc said Canadians expect stringent conditions on any federal airline funding, such as addressing the issue of travel vouchers, which carriers gave passengers instead of refunds for cancelled flights early in the COVID-19 pandemic.

The United States and some European countries have demanded airlines provide reimbursement while offering them billions in financial aid, with strings attached that include 20 percent government ownership in the case of Lufthansa and emissions-reduction commitments from Air France-KLM.

Last week, WestJet Airlines announced it will suspend operations to four cities in Atlantic Canada and slash service to others in the region. Air Canada suspended service on 30 regional routes starting in July, mainly affecting travellers to and from the Maritimes, Quebec, and Saskatchewan.

The two carriers have laid off or furloughed more than 30,000 employees since March as passenger numbers in Canada fell about 90 percent year over year over the summer, with little improvement since.

Regional airlines are calling for more leadership from Ottawa to co-ordinate an easing of restrictions, such as the Atlantic travel “bubble” that requires a two-week quarantine for anyone entering the region.

Ultimately, McKenna is hoping rapid testing can take the place of travel barriers, including the two weeks of self-isolation required of new arrivals in Canada.

“The thing they really need to do is to make sure that these quarantines are abolished. We have control measures, temperature checks,” he said.

In 2009, Ottawa contributed $13.7 billion to the bailouts of Chrysler Group and General Motors as part of its response to the global financial crisis, and ultimately left taxpayers $3.5 billion short of breaking even on their investment after the government sold off the last of its shares in the auto giants in 2015.

The Canadian Union of Public Employees has said a federal stake in airlines should be a condition of any assistance from Ottawa, on top of significant carve-outs to protect the 15,000 flight attendants it represents.