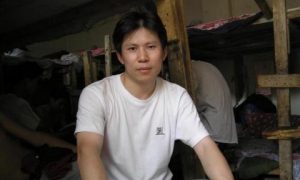 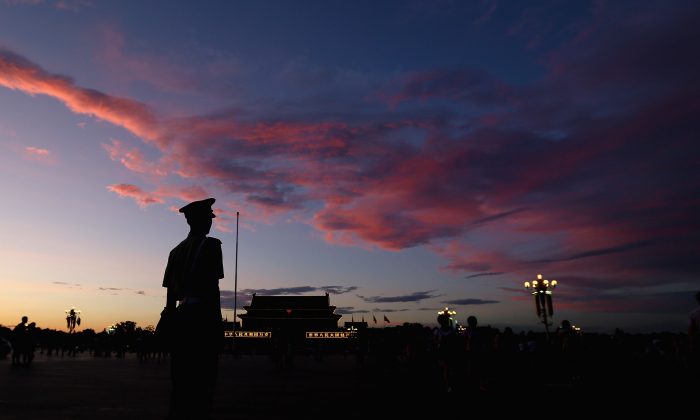 A Chinese paramilitary policeman guards at Tiananmen Square under crimson clouds at sunset after several days of heavy air pollution on July 4, 2013 in Beijing, China. An August 5, 2013 editorial from the Global Times, a state-run news agency, says that the Chinese Communist Party's collapse will only bring "battles and bloodshed," a claim highly disputed by Chinese netizens. (Feng Li/Getty Images)
China

Regime Falls Only With ‘Battles and Bloodshed,’ Says Mouthpiece

A regime mouthpiece commentary said on Monday that the Chinese Communist Party’s collapse will only bring “battles and bloodshed,” a sentiment immediately rebutted by Chinese netizens who grew angry over the report.

The editorial from the Global Times, a state-run news agency that plays to nationalist sentiments, cites Russia after the fall of the Soviet Union in 1991 as an indicator of what could happen to China, saying that bordering nations saw “immense suffering at the beginning of the Soviet collapse.” It went on to state that a “couple of years’ chaos” would be an unfair price to pay for national prosperity, while dismissing the value of democratization.

Netizens on Sina Weibo, China’s Twitter-like platform, expressed their disapproval of the Global Times’ views, with many writing lengthy responses.

A Beijing netizen compared the trials China may face to the labor pains of a mother giving birth, saying, “Suffering is the price for transitioning. The longer you delay change, the more suffering and unrest there will be. The Global Times described this as a collapse filled with blood and war—but that’s either slander or a threat they’re making.”

“Let’s cast aside the Soviet Union’s misery and focus on the sources of unrest in China,” said well-known Chinese scholar and lawyer Yu Jiangrong. “Isn’t unrest caused by selfish members of the upper class who rob people and widen the wealth gap? And aren’t corrupt officials living large, causing morality to crumble?”

A netizen from Guangdong Province said, “If Russian instability cost ten years of life, how much does maintaining China’s stability cost?”

“Don’t try to intimidate us with the threat of wasting ten more years. Weren’t the lives of those born in the 1980s to 1990s wasted by you? These days, a person can barely even afford an apartment.” commented a Taiwan netizen.