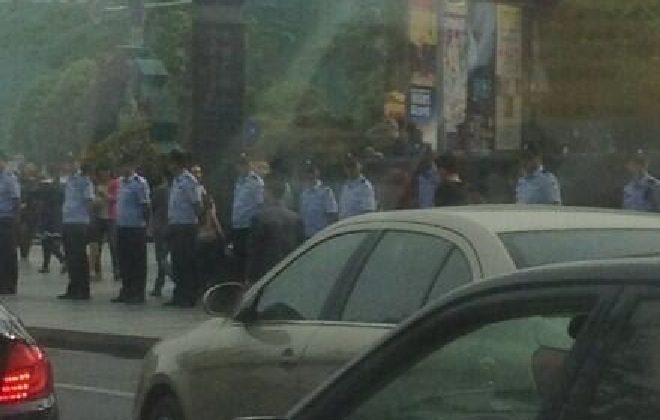 Police gather along the streets in Pengzhou on May 4, to head off potential protests over the construction of a new chemical plant. (Weibo.com)
China

Local authorities tried to pre-empt protests on Saturday, as residents gathered to demonstrate against a large-scale petrochemical plant being built on a fault line in Sichuan Province.

Located in Pengzhou near Chengdu, the 40 billion yuan plant belongs to state-owned oil giant PetroChina, and is expected to yield 10 million tons of refined oil, nearly 1 million tons of ethylene annually, as well as a toxic derivative called paraxylene (PX).

Locals have been protesting the development for five years, and had planned a “walk on the streets” protest to commemorate the demonstration of May 4, 2008. But the Communist Party had other plans.

An April 29 announcement by Chengdu’s municipal government claimed PetroChina has said that “production would not be allowed until the project had received statutory acceptance.” However, residents are not convinced.

The Chengdu authorities then undertook a door-to-door campaign distributing flyers to “maintain stability,” and asking residents to sign paperwork promising not to join any human rights protests. Police forces were mobilized to the area.

A local using the alias He Fan told The Epoch Times that he visited the plant site, because he is concerned about its effects on his family’s health. “This huge chemical plant is being built in an earthquake-prone place, and the people of Sichuan will have to bear the consequences–this is highly irresponsible. We experienced the May 12 quake, and now five years later the powerful April 20 quake. Everyone living here feels under tremendous pressure.”

A resident called Huang Xiaomin added that he has received reminders and warnings from the authorities. “They have set boundaries on where I can go,” he said. “Two hours ago, I signed a guarantee that ‘I will neither watch from the sidelines nor participate.’ The streets are covered with warning notices.”

A Chengdu netizen posted a warning notice on Weibo that was also addressed to local businesses: “To all Banbianjie Village, Jitou Township residents, pharmacies, clinics, and members of the printing industries: From now on, if anybody come to your business to buy face masks and other items in bulk or to copy and print anything, including ‘human health, the Pengzhou Petrochemical Project, PX,’ or other related terms, record the individual’s identity card number and phone number. Also please quickly report it to the police station or a policeman in the community. Thank you for your cooperation!” The notice also included the phone numbers of the police station and community police.

Another netizen commented on Weibo: “This is too sinister. Our company received instructions today to check all employees from Pengzhou and to warn them not to cause trouble over the chemical plant. Apparently, our company is not the only one that received these instructions; many companies did. What kind of society is this?”

Chen Qian, a local business owner, told The Epoch Times that security staff from the community have also joined the protests in the last two days. “The government is very nervous and panicky,” he said.

Residents were further angered when the Chengdu Public Security issued a notice stating that the city’s entire public security system will hold a combat drill to “support earthquake relief and create a peaceful Chengdu.”

“Real combat? Who is the enemy?” responded one Internet user.

When the project was first put forward in 2008, Asia Week Hong Kong reported that, aside from the potential threat of earthquakes, the plant’s waste water will increase pollution of the Tuojiang River, and exhaust gases will be emitted directly into the Chengdu basin. Known as “China’s most livable city,” it would instead become a toxic place.

The magazine interviewed environmental activist Tan Zuoren, now imprisoned after he drew attention to the shoddy buildings that crushed children during the 2008 Wenchuan quake, who said at the time: “I have worked on environmental protection for many years, and I have done some planning for the Chengdu Municipal Government. One look at the Pengzhou Petrochemical Site tells me it will be terrible. How can this giant petrochemical plant be built in Chengdu, an area where water flows upstream and wind blows upwards, in addition to being in a seismic zone?”

An anonymous Chengdu resident told The Epoch Times that the project was proposed when Sichuan’s former deputy Party chief Li Chuncheng colluded with state-owned oil monopolies, and those then in power were bribed by ex-security tsar Zhou Yongkang, who is also in control of PetroChina. The source said that the plant is “a GDP-boosting project stained with blood.”

Li Chuncheng was Zhou’s former fixer, and was detained for graft last December.

May 4 is also a sensitive date for the Communist Party as it signifies the start of the influential student movement that grew out of demonstrations in Beijing in 1919.