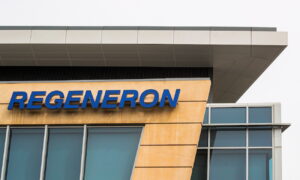 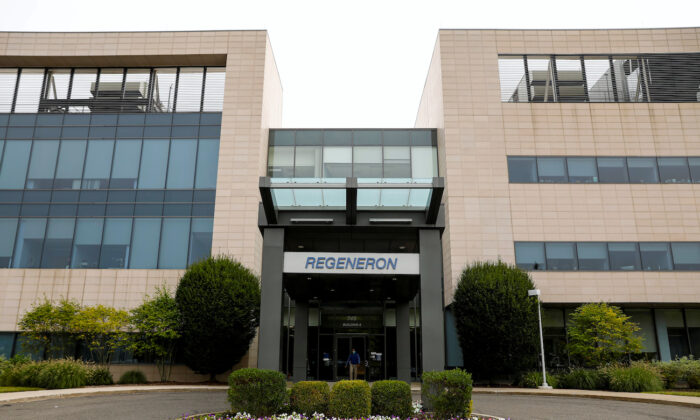 The Regeneron Pharmaceuticals company logo is seen on a building at the company's Westchester campus in Tarrytown, New York, on Sept. 17, 2020. (Brendan McDermid/Reuters)
AMERICA

Regeneron Pharmaceuticals said on June 4 that the Food and Drug Administration (FDA) is allowing a lower dose of its CCP virus treatment for injection.

The approval comes as an update to the FDA’s emergency use authorization (EUA) for the company’s antibody cocktail to treat COVID-19, the disease caused by the CCP (Chinese Communist Party) virus. The treatment has been available under the EUA since last November for those recently diagnosed with COVID-19.

The FDA had in November authorized a 2,400-milligram dose of the antibody cocktail REGEN-COV—a combination of the monoclonal antibodies casirivimab and imdevimab—to be administered as a single dose directly injected to a vein for non-hospitalized COVID-19 patients.

As part of the updated EUA, REGEN-COV is approved for injection “when IV infusion is not feasible and would lead to a delay in treatment.”

The new dose authorized for both injection and IV infusion would be 1,200 mg (600 mg casirivimab and 600 mg imdevimab)—half that of the originally authorized dose. The move means that more doses will now be available for patients under the company’s contract with the U.S. government.

Regeneron recently announced that its phase three trial showed that its drug reduced the risk of hospitalization or death by 70 percent in high-risk patients with mild to moderate symptoms of COVID-19. The trial also showed that the treatment effect was consistent between 1,200 mg and 2,400 mg doses.

The updated authorization (pdf) allows the drug to be combined into a single vial for injection, although it can still be administered via separate individual vials.

“Despite increased use of vaccines, thousands of patients are still becoming infected in the U.S. every day, with many at high risk of serious complications from COVID-19,” George Yancopoulos, the president and chief scientific officer at Regeneron, said in a statement. “Unfortunately, to date, only a fraction of patients eligible for antibody treatments have received them, which we hope will change based on this updated FDA authorization. REGEN-COV is readily available and supplied free of charge by the U.S. government.

“REGEN-COV has also demonstrated potency against the main variants of concern to date in vitro and is the only antibody therapy currently available across the U.S., including in states where variants first identified in Brazil and South Africa are circulating at a higher rate.”

According to The Wall Street Journal, Regeneron’s therapy has been underused in part because not all clinics and hospitals are equipped to administer IV infusions. The newspaper reported in December 2020 that some doctors weren’t comfortable with prescribing the antibody cocktail, saying it requires further study as it is new. They also had difficulty picking which patients would potentially benefit from the drug.

In addition, some patients declined the therapy as they were unable to make time for the two hours needed for administration and monitoring.

Regeneron announced that it expects to deliver at least 1 million doses of its antibody cocktail to the federal government by June 30, adding that the government may accept up to 1.25 million more doses through September.

Monoclonal antibodies are laboratory-created proteins that mimic natural antibodies the body produces to fight off harmful pathogens, such as the CCP virus.

Other companies have also been developing antibody drugs, including Eli Lilly, which had received an EUA in February. Distribution of the company’s drug has paused as of late May in eight states, where cases of certain COVID-19 variants are rising. Evidence suggests the Eli Lilly antibody formulation is ineffective against such variants, the Department of Health and Human Services said.