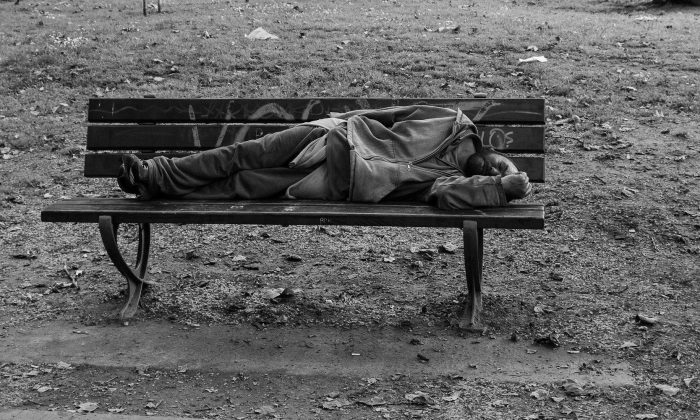 Regarding Families and Homelessness

Part II of a Two-Part Series
By Shelley B. Blank

Last week, in Part I, David Pirtle, the public education coordinator for the National Coalition for the Homeless, said: “Families are most likely to be homeless for economic reasons, as opposed to the stereotypical causes to which we attribute the problem. The figure mirrors the percentage of children overall in the country living in poverty. That’s why I like to say that homelessness is really just the most visible tip of the ‘poverty iceberg’ in America.”

David Pirtle was originally a restaurant manager in Phoenix, Ariz. He began to experience the symptoms of schizo-affective disorder in his early twenties. He was unable to maintain employment due to his mental illness and became homeless at twenty-nine. David began to travel around the country and stayed in New York City for six months before coming to the nation’s capital on New Year’s Day in 2005. He lived on the streets in Washington, D.C., for over a year, mainly shoplifting to survive, until he was arrested and eventually placed into mental health treatment. He was also referred to a homeless shelter, where he lived for another eight months. During his experience with homelessness, David was assaulted, beaten with a baseball bat, and even spray painted. On November 17, 2006, David was granted an apartment through Washington’s inaugural Housing First program.

Today, David is a homeless advocate who specializes in hate crimes and criminalization of homelessness issues. David began working with the National Coalition for the Homeless in 2006. He credits the speakers’ bureau with helping him to maintain his mental health, saying, “It is easy to lose your voice when you’re homeless.” David enjoys seeing the effect one can have on people by “simply sharing your story.”

The National Coalition for the Homeless is a national network of people who are currently experiencing or who have experienced homelessness, activists and advocates, community-based and faith-based service providers, and others committed to a single mission: To prevent and end homelessness while ensuring that the immediate needs of those experiencing homelessness are met and their civil rights protected.

Here is the final part of our interview with Mr. Pirtle.

SBB: What about the idea of a “Marshall Plan” to address homelessness?

DB: I think we’ve already seen such an initiative on a limited scale. One of our current president’s pledges upon taking office was a zero-tolerance policy when it came to the problem of homeless veterans.

By allocating a significant amount of money and manpower to tackle this specific issue, in half a decade we’ve seen several cities work their way to a “functional zero” level of veteran homelessness, meaning that every veteran who is willing to accept help can be rapidly housed. The success we’ve had tackling veteran homelessness puts the lie to the notion that homelessness is “intractable.” We can end it, and end it fast if we could muster the political will to do so.

SBB: What is it that nobody asks about the issue of homelessness?

DB: I think, particularly in light of the criminalization of homelessness, something most people aren’t aware of is just how little actual services there are. Pasadena has nowhere near the capacity in shelters, transitional, and permanent supportive housing to help its current homeless population, and this is the case in almost every city in the country. Yet we want to punish people for sleeping outside. This is why the U.S. Justice Department recently called such measures cruel and unusual punishment, and in violation of the Constitution.

Another thing that nobody seems to ask is just how much money we’re spending harassing and incarcerating men and women for existing while homeless, as opposed to how much it would cost to get them back into secure housing. Between 2004 and 2008, for example, San Francisco wasted nearly $10 million passing out citations and arresting people who were homeless for crimes such as blocking the sidewalk or sleeping where they weren’t supposed to do.

This is money that could have housed hundreds of individuals and families with wrap-around services to address the reasons they became homeless in the first place. Instead, the city chose to flush it down the toilet in the mistaken belief that making homeless people more miserable would somehow cure their homelessness.

Thanks for your inquiries, and good luck on your article.

Next is a complete interview with Erin Fitzgerald, digital communications specialist at endhomelessness.org.

SBB: How does your group work with the homeless in particular?

EF: The National Alliance to End Homelessness is a national nonprofit organization. We use research and data to find solutions to homelessness; work with federal and local partners to support those solutions, and collaborate with communities that implement them. We educate leaders, impact communities, and promote solutions for change.

This approach helps to prevent homelessness before it occurs; focus on timely returns to permanent housing; implement evidence-based strategies at the community level and strengthen the support system for vulnerable Americans.

SBB: What do you feel the public does not know about homelessness that they should know in the U.S.?

EF: While overall homelessness is decreasing, there are too many people at risk. Ultimately, this is because it is hard for them to afford housing. On a single night in January 2015, 564,708 people were experiencing homelessness—meaning they were sleeping outside or in an emergency shelter or transitional housing program. This is a 13 percent decrease since 2007 (the year prior to the recession).

SBB: What do you see, according to your policy goals and expectations, would be the next step to take?

EF: The homeless assistance system has been shifting their focus to a Housing First approach that prioritizes permanent housing to people experiencing homelessness, thus ending their homelessness and serving as a platform from which they can pursue personal goals and improve their quality of life. There is a large and growing evidence base demonstrating that Housing First is an effective solution to homelessness.

But despite the promising work by the homeless assistance system, there is an affordable housing crisis that threatens the millions of people at risk of homelessness. We believe Congress should:

SBB: What do you think the general public and/or media can do to turn the situation toward a more positive goal?

EF: We think the general public and media have come to understand that homelessness is a complicated problem, but one with a solution. By highlighting the successes of individual communities, the media can reshape the conversation to one based on solutions. For example, communities across the country are effectively ending veteran homelessness. Take a look at this map: http://www.endhomelessness.org/library/entry/ssvf-surge-map

SBB: Is it out of the box to have a program like the Marshall Plan to reevaluate the homeless?

EF: Shelley—if I am understanding the question correctly, this is a question about why we can’t focus short term, targeted funding to help create long-term solutions?

There are communities that are doing this by declaring States of Emergency largely due to increases in unsheltered homeless populations. Seattle (King County), Washington; Portland, Oregon; and the State of Hawaii have all declared States of Emergency. This means their governments suspend normal procedures to take urgent action—i.e., using funds more flexibly, reducing regulatory barriers, and/or devoting additional funds to the problem.

SBB: I wonder if the government could give all homeless people willing to work the job of cleaning the environment—anywhere—parks, streets, graffiti, etc.

SBB: Thank you for your information and your honesty.

Reflections: Poverty is Anti-Evolutionary—You Do the Math

Poverty is the head of many families, neighborhoods, cities and entire countries. It is multi-generational, trapping siblings from one generation to the next into a socioeconomic abyss that is becoming more and more impossible to ascend from—largely because this inheritance of social ill health has sociologically disturbing effects on an individual’s emotional and cognitive development and functioning.

There’s a moral issue here. How much more do we have to talk about the fact that poverty is not good for human beings? —
— Cynthia García Coll, psychological scientist, child development researcher, and provost , Carlos Albizu University in San Juan, Puerto Rico

Today, around 21,000 children died around the world. Every minute, some 15 children die from poverty, easily preventable diseases, illnesses, and related causes. This rarely makes the news.