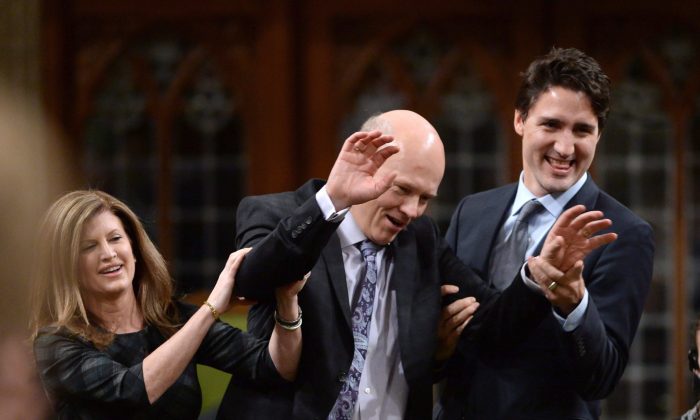 Newly elected Speaker of the House Geoff Regan jokingly resists as he's escorted to the speaker's chair by Conservative interim leader Rona Ambrose and Prime Minister Justin Trudeau in the House of Commons on Dec. 3. (THE CANADIAN PRESS/Sean Kilpatric)
Canada

Possibly the Speaker’s toughest job, however, is to maintain order and defend the rights and privileges of all MPs, including the right to speak freely—not always an easy task.

Geoff Regan, Canada’s new House Speaker, aims to create a different kind of tone in the Commons. He says that for his part, diplomacy is important. As for the members, he hopes they will engage in “respectful debate,” and has vowed that unparliamentarily conduct or heckling will not be tolerated.

I am anxious to see a better atmosphere in the House and I think most Canadians are as well.
— House Speaker Geoff Regan

“I am anxious to see a better atmosphere in the House and I think most Canadians are as well,” Regan said in an interview.

“I was pleased last week that the atmosphere was quite good. Whether we will reach perfection—that is a lot to ask for, but I would like to continue to see improvement.”

In his acceptance speech in Parliament on Dec. 3 after he was elected Speaker, Regan said he looked forward to working with the prime minister and members “to build a positive working environment for all, and I hope we will have meaningful, respectful debate.”

Having respect for each other is part of improving the atmosphere in Parliament, he says.

“I would like to see continued improvement in the decorum and that involves not only the question of heckling—we want to see people treating each other with respect.”

Regan, who has been an MP for over a decade, was first elected in 1993 and served in the position of fisheries minister in former prime minister Jean Chretien’s government. He was also appointed as minister of justice and attorney general for the Maher Arar inquiry, and more recently served as the liberal opposition critic for natural resources.

During his time in the House, Regan has witnessed three Speakers in action: Gilbert Parent, who presided over the first election of the Bloc Quebecois to the commons; Peter Milliken, who became the longest-serving speaker; and, most recently, Andrew Scheer, the youngest Speaker in history.

“I have seen Speakers use various approaches or tools in their work over the years, and I have also served in a number of capacities,” Regan says.

“Above all, having a long experience and having seen different Speakers deal with different situations, I have formed some feelings and views about what would work best,” he explains.

“I have seen Speakers who could be very effective in showing authority. I can recall one occasion in particular where a Speaker effectively brought a halt to disruptive behaviour.”

Regan says the international discussions and travel that he was required to do during his time as a fisheries minister will stand him in good stead in his new role. He addressed the United Nations, attended several international meetings, and hosted discussions on fisheries issues in the Grand Banks.

“There are a variety of aspects of that job that were international and involved some diplomacy, which is a big part of the Speaker’s job,” he says.

“You learn a little bit when you do things at that level about what works and doesn’t work.”