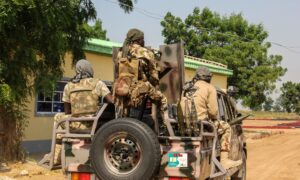 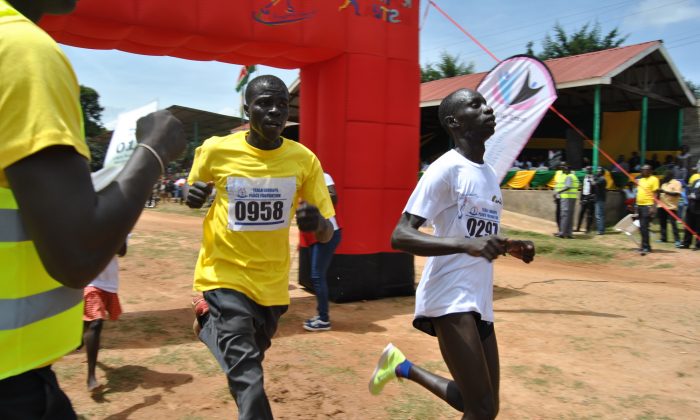 Refugees in Kenya Run for Peace in Their Countries

KAJIADO, Kenya—In 2002, at age 9, James Nyang was to be taken as a child soldier so he could fight for his clan in South Sudan. It was his family’s turn to give one male, and his father had already been killed in the war that had hit the country that year.

But the now-25-year-old’s mother would not allow it. “She told me that I would be better to go die somewhere else instead of being put in the place of my dad,” Nyang said.

So he left his home, escaping into the bush with some neighbors who were also fleeing after their homes were burnt down.

After a few days in the bush, Nyang and his neighbors were picked up by a United Nations refugee agency (UNHCR) truck and taken to the U.N. compound in South Sudan.

One month later, they were taken through the town of Lokichogio to Kakuma refugee camp in northern Kenya, where he lived until 2015.

“Life was very difficult for me at the camp, since I was young and had left my mother and siblings back home and was not aware of how they were surviving back there,” Nyang said.

In 2015, he was chosen by the UNHCR for athletic training in Ngong, near the capital Nairobi, at the Tegla Loroupe Peace Foundation, an organization founded by the marathon world-record holder.

At the foundation, the refugees also enroll in school through scholarships, while living and training in the camp. Nyang is an engineering student at Kisii University–Nairobi, and says his dream is to go back home to his family when he is able to.

The UNHCR estimates that 31 people around the world are newly displaced every single minute. According to its 2017 Global Trends report, about 68.5 million people had been driven from their homes across the world at the end of last year. In most cases, these people are driven out of their countries by war and lack of peace.

In Kenya, most of the refugees in the Kakuma camp are from South Sudan, Africa’s war-torn youngest nation, and the Democratic Republic of Congo.

In realization of the need to bring peace to these countries, the UNHCR, in collaboration with other like-minded organizations, is trying to empower refugees through sporting activities so they can go back to their countries and become peace ambassadors.

On Nov. 9 and 10, the UNHCR and the Tegla Loroupe Peace Foundation organized a peace race in Kapenguria, western Kenya. Many refugee marathon runners who have competed and won medals at world marathon tournaments took part, competing alongside elite marathoners and reformed cattle rustlers.

UNHCR country representative Raouf Mazou says sporting is about inclusion, because it allows many people who have found refuge in Kenya to get involved in the life of the country that has welcomed them.

“Kenya is one of the top countries in the world when it comes to athletics, and that is clearly an area where refugees can be included. And they are—refugees participate in the Olympics games,” Mazou said. Five of the 10 refugees who participated in the Rio 2016 Summer Olympic Games were South Sudanese who came from Kenya.

“The best solution for any refugee, and if you asked any refugee around the world, they want to go back to their home countries. Athletics and sports is the way for them, while they are in exile, to go, to thrive, to develop, and that is what we are expecting,” Mazou added. “Some of them may return to their countries of origin, some of them may stay in Kenya, but at the end of the day we want them to be stronger and more resilient—and this is what sports is all about.”

However, not all refugees dream of going back to their home countries, usually because of painful memories. In the case of Nsazumukiza Gasto, a Congolese refugee living the Tegla Loroupe training camp in Ngong, memories of the fateful night that made him a refugee cause him to break down in tears.

Gasto left his country in 2003 when he was 10 years old and fled into Burundi. “That was when I lost both my parents and also my brother and sister. I was the only one left in the family,” he said.

Once in Burundi, Gasto met with UNICEF officials and was taken to a camp. However, he couldn’t go to school in the camp, so he left Burundi and went to Uganda, where he settled in the Nakivale Refugee settlement in Isingiro District, Southwest Uganda.

“In both these camps, I was doing menial jobs so I could get money for the fare to Kakuma. I left Nakivale and traveled to Kakuma by bus and settled here until 2015 when I was picked after a friend of mine told me about a race to select those who will come to the camp here in Ngong. He had seen me run every morning in my practice for taekwondo, which I like doing,” Gasto said.

In early October, Yiech Pur Biel, a refugee athlete and a recipient of the International Crisis Group’s Stephen J. Solarz Award, was one of five refugee athletes who accompanied Ambassador Tegla Loroupe, a Kenyan former star long-distance runner, to the International Olympic Committee’s Olympism in Action Forum and the Youth Olympic Games, both held in Buenos Aires, Argentina.

Biel appealed to the Olympic Committee to include the Refugee Olympic Team in the Tokyo 2020 Games, a request that was accepted without question according to Biel.

“Our participation in the Olympics is to carry the message of the millions of people who have lost hope in life. In everything that we are doing, we need to leave a legacy. Personally, I am very happy to be part of these memorable events in life,” he said.