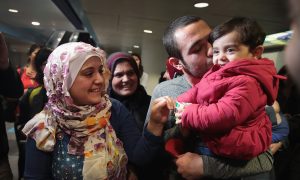 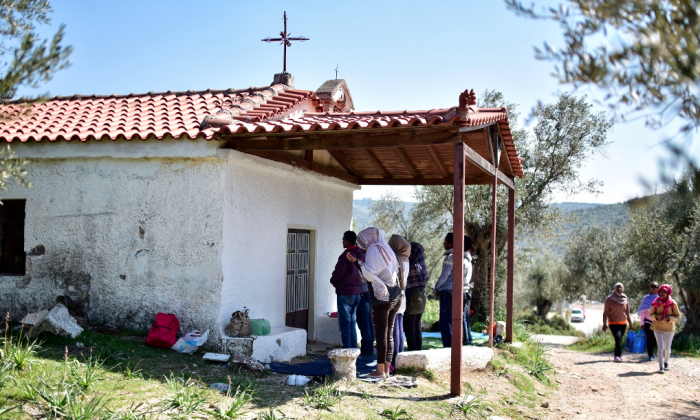 Eritrean and Ethiopian Christian refugees pray outside a small Orthodox church near the Moria migrant camp on the Greek island of Lesbos on March 28, 2017.
US News

Refugees in America: Quotas, Challenges, and Where Most of the Money Goes

WASHINGTON—Only a tiny portion of the American taxpayer money slated for refugees goes toward resettling them in the United States.

The vast majority of money helps to stabilize people overseas until it is safe for them to return to their home country—and that is the preferred (and cheaper) option, according to the State Department and the United Nations High Commissioner for Refugees (UNHCR).

However, it’s the resettlement of refugees in America that has stirred so much controversy in recent months.

President Donald Trump issued an executive order on Jan. 27 called “Protecting the Nation From Foreign Terrorist Entry Into the United States.” Aside from a 90-day hold on visas from some terror-prone nations, Trump put a temporary hold on all refugee intake for 120 days until the screening and vetting process could be audited and updated as necessary.

A court injunction followed, and the temporary refugee hold was itself placed on hold.

The administration released a second, slightly narrower version of the executive order on March 6, which faced more litigation.

The Supreme Court, which was set to hear the case on Oct. 10, dropped it from the docket on Sept. 25, a day after new travel restrictions for eight countries were announced.

The temporary refugee ban will lapse on Oct. 24.

The State Department is responsible for refugee intake into the United States, and it uses the program as both a humanitarian and a foreign policy tool, according to Lawrence Bartlett, director of refugee admissions for the department.

“Resettlement is a very small tool that’s used, and really has to be used judiciously,” he said at a panel discussion at The Heritage Foundation on Sept. 20.

Bartlett said refugees are the most highly vetted immigrants coming to the United States.

“But we still want to see where improvements can be made, because we know that there will be vulnerabilities and we need to try to close those vulnerabilities as we can. So the vetting review is really key,” he said.

“We’ve also been tasked with doing cost studies—what is the cost to resettle refugees to the United States, and how does that compare to the cost of providing assistance overseas.”

The number of refugees accepted into the United States this fiscal year is capped at 50,000. Trump is expected to announce next year’s ceiling by the end of September.

Only 31 countries accept refugees, and the total number resettled globally is paltry compared to the estimated 17.5 million refugees identified by UNHCR. Last year, the United Nations set a goal of resettling 10 percent of the total number of refugees; however, even with increased intake from Europe, only 5 percent to 8 percent was reached, according to Larry Yungk, senior resettlement officer for UNHCR.

“Resettlement is not the option for most refugees—99.5 percent of refugees will not be resettled,” Yungk said. He advocates constant monitoring of the program, “to make sure that we don’t have precious places being used by people who don’t deserve to be resettled and … who are taking away from other people who should be resettled.”

The United States resettles a higher number of refugees than any other country.

Yungk said UNHCR referred 45,000 refugees for resettlement in the first six months of 2017, 40 percent of whom were taken by the United States and 50 percent by a smattering of European countries.

However, the lion’s share of assistance goes to refugees in the place they flee to.

The United States remains the single largest donor to the Syria response, having provided nearly $7.4 billion since the beginning of the crisis to help provide food, medical care, shelter, protection, education, and other necessities to those in the region, according to a U.S. official.

“We are also the largest donor to the humanitarian response for displaced Iraqis, having provided nearly $1.7 billion since the start of fiscal year 2014,” the official said.

Bartlett said that based on anecdotes, refugees are believed to flourish better than some other immigrant groups; however, assimilation and integration remain the top challenges.

Nonassimilation can lead to enclaves, isolation, and higher unemployment rates.

The FBI has reported that approximately 300 persons who entered the United States as refugees are currently the subjects of counterterrorism investigations, according to the DHS.

“We want people to become an American,” Bartlett said. “But trying to define what that is in terms of ‘American’ in such a complex society that we have, with all different ethnic groups and people from different backgrounds, is an interesting question … but it’s one of the things that the current administration is really interested in.”

Bartlett said high-level discussions are already underway about what additional programs can be provided to help refugees make the transition.

Joseph Cassidy, a global fellow at the Wilson Center, said refugee resettlement has three general phases—pre-arrival, reception, and post-resettlement—all of which have room for improvement.

The pre-arrival phase is when the vetting occurs, and Cassidy said that’s where a values-alignment process could take place.

“Americans generally are uneasy about the prospect of government-administered ideological tests, and we should be,” he said. “But I can imagine some sort of a process that would address these values issues as part of the vetting process. It would have to be very carefully designed, but, if well-designed, I can imagine it doing a number of important things: One, weeding out security risks, or helping to at least. Two, reinforcing norms or expectations of conduct or behavior in our country. And also, three, potentially dissuading those who are unwilling to accept those norms and conventions.”

Trump said persecuted Christians are a favored group for refugee resettlement, in an interview with Christian Broadcast News on Jan. 27.

“They’ve been horribly treated. Do you know, if you were a Christian in Syria, it was impossible, at least very tough, to get into the United States?” Trump said. “If you were a Muslim, you could come in, but if you were a Christian, it was almost impossible. And the reason that was so unfair—everybody was persecuted, in all fairness—they were chopping off the heads of everybody, but more so the Christians. And I thought it was very, very unfair. So we are going to help them.”

In releasing the 2016 International Religious Freedom Report, Secretary of State Rex Tillerson said the administration is committed to advancing religious freedom around the world.

“More recently, ISIS has claimed responsibility for attacks on Christian pilgrims and churches in Egypt,” he said. “The protection of these groups—and others subject to violent extremism—is a human rights priority for the Trump administration.”

Since Trump’s first full day in office (Jan. 21) through Sept. 23, the proportion of Christian refugees admitted to the United States compared to Muslims has increased from that seen in 2016 under former President Barack Obama.

The United States first created a refugee classification in 1946. After that year, many refugee programs were enacted on an ad hoc basis, including the Displaced Persons Act, and the Cuban Adjustment and Indochinese Refugee Adjustment acts.

Since 1957, most refugee admissions have been granted refugee status and later given lawful permanent resident status, or if the limit has been reached, the attorney general has had the authority to parole more refugees in, according to DHS.