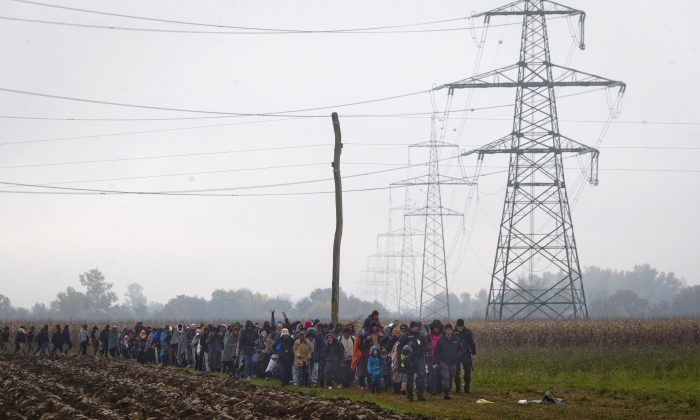 Migrants queue after crossing from Croatia, in Rigonce, Slovenia, Sunday, Oct. 25, 2015. Thousands of people are trying to reach central and northern Europe via the Balkans, but often have to wait for days in mud and rain at the Serbian, Croatian, and Slovenian borders. (AP Photo/Darko Bandic)
Europe

OPATOVAC, Croatia—The latest news as asylum-seekers make their way across Europe by the tens of thousands, fleeing war or seeking a better life. All times local:

German authorities say three people were injured when a fight broke out over religious differences between two groups in a home for asylum seekers.

Dresden police said Sunday that about 100 people were involved in the fight overnight in the asylum center in nearby Niederau, the dpa news agency reported.

Police say an Afghan man was identified as the instigator and was taken into custody after he was treated for injuries.

About 30 police officers helped break up the fight between an estimated 40 Afghans and about 60 others.

Serbia’s prime minister is calling for a “comprehensive solution” to the migrant crisis at the upcoming summit of several EU and Balkan nations.

Aleksandar Vucic spoke Sunday before traveling to Brussels to meet the leaders of countries coping with the influx of tens of thousands of migrants hoping to reach Western Europe.

Vucic said he expects “hard, not very pleasant” talks, but hopes for a “comprehensive solution.” He insisted Serbia is not afraid of its “responsibility” and will not “put up any walls.”

But, Vucic also suggested his country will not agree to be the only migrant stop if countries further west close their borders.

Nearly 250,000 migrants have passed through the Balkans since mid-September and the surge is not expected to stop despite colder weather.

Croatia says a record number of 11,500 migrants have entered the country in one day in a sign that the flow of people toward Western Europe is not abating.

Interior Ministry spokesman Domagoj Dzigulovic said Sunday that the number of people who crossed into the country on Saturday was the highest in a single day since migrants started coming to Croatia in mid-September.

Migrants turned to Croatia after Hungary erected a barbed-wire fence along its border with Serbia. They now mainly travel from Turkey to Greece and then go north to Macedonia and Serbia before entering Croatia and move on to Slovenia and Austria. Most are aiming to get to Germany or Scandinavia.

Police say nearly 250,000 have crossed through Croatia since mid-September.