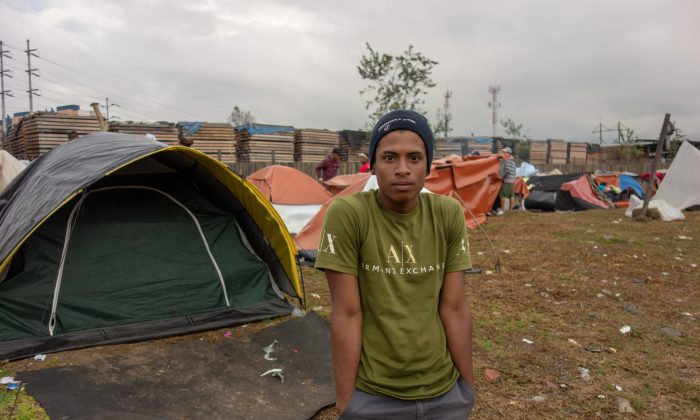 Jose Urdaneta, a 19-year-old Venezuelan living in an improvised refugee camp in Bogota, Colombia, on Nov. 9, 2018. (Luke Taylor/Special to The Epoch Times)
Americas

BOGOTA, Colombia—“What is the worst thing you have ever lived through?” asked José Urdaneta, describing his living conditions in a camp in Colombia. “Imagine that, but five or 10 times worse.”

Urdaneta is one of the many Venezuelans who have fled their crisis-stricken country. According to a new report by the United Nations High Commissioner for Refugees (UNHCR), the number of people who have left Venezuela for other destinations around the world has now reached 3 million, roughly one in 12 of the nation’s population.

To elaborate his assessment of life in the camp, 19-year-old Urdaneta glances at the rows of plastic-covered tents and rubbish-strewn stretch of grass in the camp, located a couple of blocks from the principal bus terminal in the Colombian capital Bogotá. “Look around you!”

The camp sprung up as individuals desperately made homes with the few possessions they had carried via bus—or even on foot—having just arrived hundreds of miles away from Venezuela. The camp was later formalized by the local municipal administration with residents formally registered and offered some government support.

The humanitarian crisis has since, however, outgrown the camp, and most now line the banks of a polluted river and the edges of a disused rail track instead. Those outside the formal camp say they wish they had the additional benefits which those inside deny ever existed.

Around 300 to 400 reside in the area; residents prepare food that is sometimes donated by nuns, NGOs, or other benevolent individuals and cook it over fires. Families congregate with their children on the adjacent road to beg, clutching their now virtually worthless Venezuelan bolivar notes.

Many are part of the latest wave to flee oil-rich Venezuela’s ever-worsening political and economic turmoil. Security is in rapid decline, hyperinflation is predicted to skyrocket to one million percent, and food and medicine shortages are widespread.

Over a million of those who have fled Venezuela are living in Colombia—with around 3,000 more arriving every day. Colombia’s foreign minister, Carlos Holmes Trujillo, said recently that the number of Venezuelans migrating to Colombia could reach 4 million by 2021.

In August, Ecuador introduced passport restrictions for Venezuelans but the new rules were defied as groups crossed illegally. Many do not hold passports; the government blames ink and paper shortages for delays.

The shared language (minus Brazil) and smaller differences in religion and culture compared to other international migration routes have helped regional sentiment remain open to migration.

This openness, however, could come under strain with the acceleration of the exodus: 1,200 Venezuelans fled their migrant camp near the Brazilian border in August after attacks from locals, and there are increasing reports of attacks in Colombia against Venezuelan migrants.

“They [Venezuelans] are no problem for security, but they are damaging the entire economy,” said Eliberto Contregas, manager of a fast-food restaurant close to the camp. “They come to receive and do nothing.”

Adam Isacson, an expert on Colombian security at the Washington Office on Latin America, said it’s hard for the neighboring countries to assimilate the migrants at the rates that they are entering the countries’ borders.

“These are countries that already have high rates of underemployment with people making sub-minimum wage in the informal sector. The arrival of hundreds of thousands of poor Venezuelans intensifies competition for the economy’s scraps,” Isacson said.

The Colombian government estimates that the migrants’ impact on health, education, and infrastructure could cost around 0.5 percent of the country’s GDP.

Despite the dire conditions at the camp, scarce job prospects, and what some say is “bad treatment” from their neighbors, none of the migrants The Epoch Times spoke to express a wish to return to Venezuela any time soon.

“Every day, it’s getting worse [in Venezuela],” said Jose Gregorio, 23, whose arrival less than a month ago is evident in his shorts, t-shirt, and baseball cap which are better suited to sunny Caracas than a cold, drizzly Bogotá. “There is nothing there: no water, no food, no medicine, no transport, and no security.”

Gregorio earns just enough to eat some bread and fruit each day by begging on the local bus system. If they are lucky, he and his friends can send around $2.50 extra home to their family every few days. He hopes prospects in Ecuador or Chile will be better and is not pinning his hopes on a quick return to his family.

“Maybe in 30 years we can go back,” he said. “Whenever they get rid of the president.”