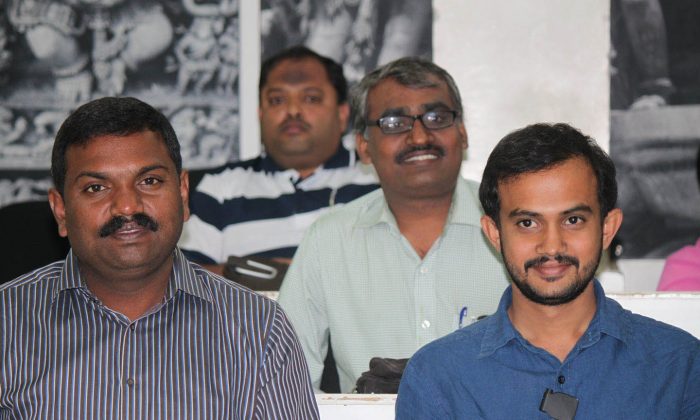 Participants in the Bangalore Political Action Committee initiative, a civic program based in Bangalore, India, that rigorously selects community leaders with the potential to become the future political leaders. It's one way Indian citizens are taking positive actions to combat corruption. (Venus Upadhayaya/Epoch Times)
India

To develop a morally sound political culture and better democracy at the grassroots, around 66 selected citizens are being trained in a civic leadership program in the south Indian city of Bangalore to play the role of would-be-leaders.

Bangalore Political Action Committee (BPAC) has launched a civic leadership program to groom commoners as the civic leaders of tomorrow; it aims to reform the system by promoting a good quality of life for the citizens and sustainable good governance practices.  In a rigorous process of selection, 250 citizens applied for the program, out of which 177 were called for interviews and only 66 were chosen.

“Change is needed at the grassroots. There’s a younger generation of voters coming into the system who want to see India being governed as a modern country,” said Revathy Ashok, the managing trustee and the chief coordinator of the program.

According to Ashok, if the concerned citizens understand the issues at the grassroots, become properly educated, and get involved in the elections, the change can happen.

Vijay Kumari, 47, a human resource and administrative manager from Edipura locality of Bangalore, bothered by various problems such as an insufficient supply of water, flooding during rains, and lack of garbage management in her area, called the local administrator one day, only to be disappointed.

“One day I inquired with the lady corporator [local elected administrator]. Her phone was picked up by her husband who asked me to talk with him instead, as he takes care of her duties. I was very disappointed. In many reserved seats for women, it’s the husbands who actually rule the constituency. They are arrogant,” Kumari said.

There are others discouraged by the lack of civic governance at the grassroots like Kumari who took up the Civic Leadership Program by BPAC to try making a change.

An art consultant, Usha R.K., 53, from J.P. Nagar, Bangalore, took up the program after being heavily disappointed over the lack of transparency in art-fund management by the elected administrators. “There are so many irregularities and frauds. We found people un-associated with art getting art funds. Someone should take it up, get into the system and clean it. At this age, I cannot get into the higher diplomatic level, but can become a part of the corporate level governance,” Usha explained.

People like Usha and Kumari shortlisted for the program had to undergo a rigorous selection process. “There were 250 applicants and each had to get 3 recommendations from the community and also get signatures of 100 registered voters from their constituency,” said Ashok.

It was not easy in most cases; except for active politicians, citizens had not interacted with their community on such a scale, and when they tried they had to face discouraging attitudes.

“When I started to interact with my community to get 100 signatures, I met with many who tried to discourage me. Some said you cannot alone make a change and others said you are risking your life,” said Kumari.

The batch of enthusiastic participants also includes entrepreneurs, politicians, and social workers. G.V. Chinnagiriyappa, 56, just two weeks ago finished his term as an elected corporator in Jyanagar area of the city. “In India, generally it’s only the political parties who produced leaders. There was no way for general people from society to get into politics.”

Chinnagiriyappa has been working with one of the main national political parties, Bhartiya Janta Party (BJP) for 20 years in the city. “I’m here just to see what more can I learn,” he said.

An environment engineer and participant from Padmanabhanagar area, Ravi Kumar, 37, was working with Greater Bangalore Municipal Corporation during a recent waste management crisis in the city. “There is a definite lack of knowledge, skill sets, and interest for doing things better. There were lots of constraints,” he said.

The nine-month program has charged participants only 5000 rupees ($81.30), which is refundable once the course is completed. “We are hoping that these citizens will contest for 2015 elections for the city municipal corporation,” said Ashok.

Anand Begur R., 32, the vice-president of Bangalore South Youth Congress, the youth wing of the Indian’s national ruling party in the city, said: “I believe in [a] strategic approach to solve civic problems, and that’s why I’m here.”