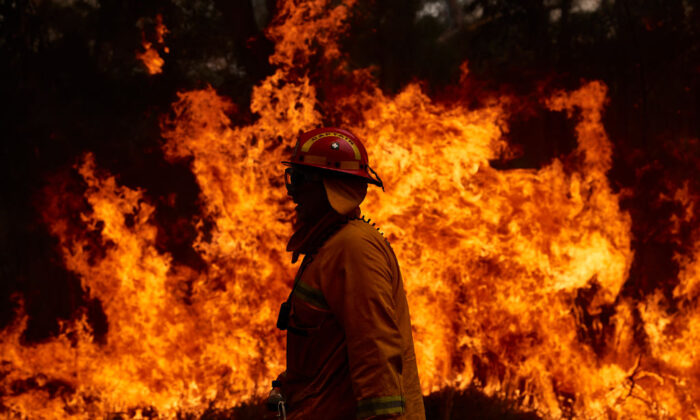 A CFA member works on controlled back burns along Putty Road in Sydney, Australia, on Nov. 14, 2019. (Brett Hemmings/Getty Images)
Viewpoints

Reflections on the Great Chicago Fire

As the summer months are fast approaching, the fire season will again be a primary concern of Australia’s fire services.

The memories of the disastrous bushfires of December 2019 and January 2020, only eclipsed by the COVID-19 pandemic, are still fresh in people’s minds. The dangers associated with fires alert people to the necessity to have safeguards in place and the need to follow the advice of the fire services.

Now is also the time to reflect on the Great Chicago Fire, which devastated Chicago 150 years ago, and to consider what we can learn from that conflagration.

O’Leary and her husband, Patrick, were Irish immigrants. Because of the dry conditions and strong wind, the fire spread and ravaged a large part of the city. The fire destroyed the downtown area and the north side of the city. Approximately 3,000 people died, and 90,000 people became homeless.

Following the disastrous fire, O’Leary became infamous when a journalist alleged that it had started when she was milking her cow that accidentally tripped over a lantern.

The allegation turned out to be a lie, propagated by an enthusiastic but devious journalist, Michael Ahern, who admitted in 1893 that the story was fake.

Nevertheless, the myth of the wayward cow was born, and for several decades, people believed that the fire started exactly how Ahern described it.

His story of the accident-prone cow may appear to be slightly amusing to a reader today, but it remains an example of an unwarranted manipulation of journalistic freedom.

The false allegation is also instrumental in revealing the prejudices which existed at the time against Irish immigrants.

Throughout her life, O’Leary was blamed for starting the Great Chicago Fire, even though she testified that she was in bed when the fire started.

What is true, however, is that the fire started in her barn. Catherine and Patrick O’Leary were unaware of the enveloping danger because they were asleep in their bed when the fire broke out.

The 150th anniversary of this cataclysmic event was commemorated appropriately in America, especially in Chicago.

For example, the Northwestern University Alumni Association invited Emeritus Professor Carl Smith to discuss the Great Fire. Smith’s book “Chicago’s Great Fire: The Destruction and Resurrection of an Iconic American City” recounts the catastrophe and the subsequent rebuilding of Chicago.

Chicago is now an entrepreneurial city that rejuvenated its skyline after the disastrous fire of 1871 when the rapacious, ravenous flames destroyed three square miles of the city.

Nowadays, people visiting Chicago can admire fibreglass cows and other farm animals, positioned throughout the centre of the city, converting it into a menagerie. The exhibition of cows is a part of CowParade, an international art exhibition held in many American cities.

But one wonders whether the enduring myth of O’Leary’s wayward cow that allegedly caused the fire may have inspired the exhibition!

O’Leary’s cow did not cause the fire, but instead, a fierce wind fuelled the flames. Chicago is also aptly known as the “windy” city because breeze coming from Lake Michigan whizz through its streets and squares.

The history of the Great Chicago Fire causes people to reflect on the ever-present dangers of fire during Australia’s upcoming dry and sweltering summer season.

Although people may regard state government regulations that impose precautionary measures to avoid fires as intrusive, these measures are cogently related to achieving a worthwhile objective, namely the prevention of fire and the protection of life and property.

In this context, it is useful to refer to the recent legislation in Queensland (and in other Australian jurisdictions) which mandates the installation of interconnected smoke alarms.

As of Jan. 1, 2022, property owners must install interconnected smoke alarms in residential rental properties. When one smoke detector goes off, all go off, thereby alerting every occupant of a dwelling of imminent danger, giving them sufficient time to escape the fire. All other non-rental residential properties must comply with the state legislation by 2027.

There is much useful information on the Queensland Fire and Emergency Services (QFES) website on the prevention of fires.

For example, the website discloses that people lose their sense of smell when they sleep. Hence, toxic fumes can easily overcome sleeping people.

Photo-electric smoke alarms are thus instrumental in alerting sleeping people of the dangers of fire, giving them time to save themselves. The new legislation specifies the type, positioning, and interconnectedness of smoke detectors, which are critical elements of a timely warning system.

It is of interest to note that, as Catherine and Patrick O’Leary were asleep when the Great Chicago Fire started in their barn and proceeded to devour the city, they would not have been able to smell the toxic fumes.

Undoubtedly, electric smoke alarms would have helped to avoid the disaster, but, alas, they were not available in that era.

It assists “all householders in recognising fire and safety hazards in and around the home.” And the “intent is to reduce death and injury and property damage due to house fires and accidents.”

This program and other programs described on the website assist in the avoidance of disasters like the Great Chicago Fire.

The Great Chicago Fire reminds people of the dangers of fire. Hopefully, policymakers and legislators will learn from this disastrous event now that the summer season is upon us.