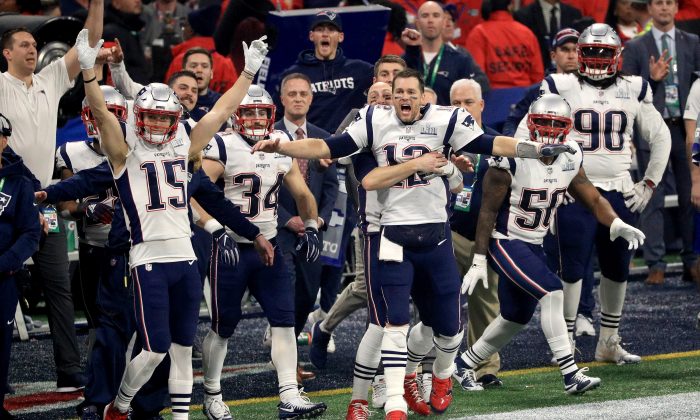 Here are a few miscellaneous thoughts: If it seems weird to you that the professional football season ends in February, well, that’s just the nature of professional sports today. Hockey’s Stanley Cup is hoisted in the heat of June and baseball risks getting snowed out by playing World Series games in November. It is the economics of sports—the fans want as many games as possible and the only way to pay the lucrative salaries of professional athletes is to prolong seasons as long as possible.

It’s hard to overstate the cultural significance of the Super Bowl and how large it looms in American life. The game and all its surrounding hoopla has evolved into what feels like the biggest national holiday between New Year’s and Easter.

Roughly 50 million more Americans watch the Super Bowl than the president’s annual State of the Union address. The latter shouldn’t be surprising—while both politics and sports are highly competitive, the contests in football are noble, rules-based, and honest, unlike politics, which is sordid, devious, and riddled with low blows.

Why are professional football and its championship game so popular? I think it’s because they serve as an allegory or archetypical representation of some primary, elemental truths that Americans acknowledge and celebrate—that life is full of challenges; that success requires dedication, commitment, perseverance, and spirit.

Football reminds us that while we are free to try to excel and achieve, ultimately, some achieve more excellence than others. The winner gets the trophy, but the losers are respected for their valiant efforts, too.

What does it say about Americans that we have elevated a sporting contest to such an exalted status in our society? Like so many things in this world, it’s a matter of tares and wheat; we can look at the glass as half empty or half full.

On the negative side, a common sign of cultural decay throughout history has been an idolization of muscularity over less visible forms of excellence, such as intelligence, learning, and virtue. Indeed, our sports heroes receive far more acclaim and adulation than the American heroes who have won the Congressional Medal of Honor; the firefighters, police, and military personnel who save and protect lives; the farmers who battle Mother Nature to provide the food that we take for granted; the linemen who fix broken power lines in subzero temperatures so we can be comfortable in our homes; caring nurses; skillful teachers; those who nourish and save souls by sharing divine wisdom; and others.

On the positive side, having a sport and its marquee event be so popular is a sign of our country’s immense wealth. Look at how many people can afford to pay thousands of dollars for a ticket and travel for an evening’s entertainment. It’s healthy that we can set aside our own personal trials and challenges, that we can forget about the political mess in our country for a few hours, and that we can just have fun asking each other football trivia questions or debating who is the GOAT (Greatest of All Time).

Sports in general and the Super Bowl in particular serve as a mirror, showing us our own character. The Patriots, like other sports dynasties, have many fans around the country who have no personal ties to New England, but are fans simply because of their dominance. Americans have always liked winners.

Other fans say they “hate” the Patriots. That is their way of saying they are tired of seeing the same team win so often—like I was when the Yankees kept being better than my Detroit Tigers, and the Green Bay Packers kept winning more games than my Detroit Lions back in the ’50s and ’60s.

Today, I still find myself rooting for the underdog against the Patriots dynasty, but I admire what the Patriots have accomplished. Sunday night, for example, while it wasn’t the most exciting football game to watch due to the low score, the way the Patriots’ defense smothered the explosive Rams’ offense was historic. (Hats off, too, to the Rams’ defense for a brilliant performance.)

I don’t buy for a minute the whiny protest that the Patriots have won six Super Bowls with Belichick and Brady because they cheat. That’s being a sore loser—but Americans don’t like to lose and that’s a sign (though not the most becoming one) of our instinct to rebel against defeat.

One reason for the popularity of professional football is that it is a meritocracy—those who are on top deserve to be there, and Americans esteem those who work hard to achieve success. A minority of fans exhibit the entitlement mentality that degrades our polity. They assert that it is “unfair” that the Patriots win so often. Baloney! Nobody has a “right” to win.

My own team, the Detroit Lions, has never played in a Super Bowl, and as much as I yearn for them to get to the big dance, there is nothing unfair about their failure to do so. They have had the same opportunity to beat the competition as the other 31 NFL teams, and they simply haven’t done it.

This is the beauty of sports and why I think Americans love sports so much: There is no entitlement in sports. Just because my team doesn’t win championships doesn’t mean that sports are unfair; it just means that they haven’t earned it yet.

You may not like the Patriots, but they deserve our respect. Winning a Super Bowl is a superlative accomplishment. Now if only the Lions could get into Super Bowl LIV …