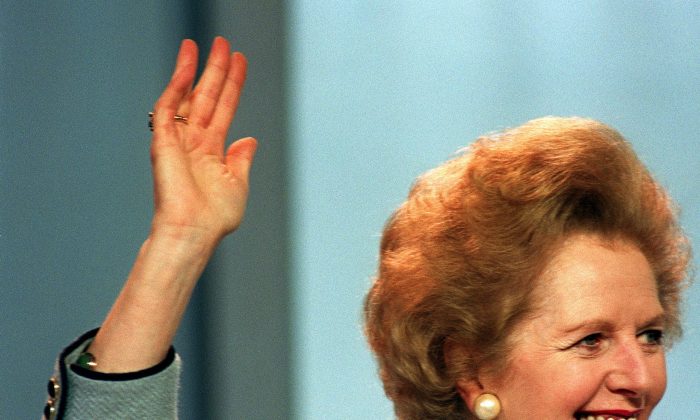 Reflecting on the Stumbles of Mrs. Thatcher and 689

“I talked to the chief executive of the SAR—I’m sorry and I apologise, the name escapes me at this point in time”—Philippine President Benigno Aquino (Oct. 2013)

HONG KONG—One, a former British Prime Minister who is widely respected at home and abroad passed away early last year; the other one managed to grab the throne of the Chief Executive of Hong Kong SAR in 2012 using the most despicable means, someone who is not only loathed by the Hong Kong people at large but also scoffed at in the international community. So what has brought these two together?

History has its way of bringing us a little joke. The common thread between the two is that both of them stumbled at the door after meeting with the Chinese leadership.

In 1982, following Britain’s victory in the Falkland War, Mrs. Thatcher met with Deng Xiaoping in China to discuss the future of Hong Kong. When leaving the People’s Great Hall, she fell on the steps.

In similar fashion, following his meeting with Zhang Dejiang, the Politburo Standing Committee member who holds the portfolio for Hong Kong affairs, a couple of weeks ago, CY Leung came close to following in Mrs. Thatcher footsteps. He nearly missed a step but managed to avoid actually falling down, thanks to his “wolf instincts” (in Hong Kong Leung Chun-ying is widely referred to as “the wolf”).

Of course, the actual difference between Mrs. Thatcher and 689 (Hong Kong citizens derisively refer to Leung Chun-ying as “689,” because this is the number of votes he received when he was elected by the small Election Committee responsible for choosing the chief executive) is like heaven and earth.

Mrs. Thatcher was a graduate at Oxford University. Her vision and vitality had injected new vigour into Britain’s political, economic and social spheres during her tenure as Prime Minister. She also raised new awareness in the international community about the undesirable consequences of welfarism. The impact she made were both long-lasting and profound.

On the contrary, 689 (I’m sorry and I sincerely apologise, the name also seems to escape me at this point in time) has his head filled with communist dogma such as “the rivalry between us and the enemies”. All he can think about is how to create hell for his enemies. I wonder if he can ever catch up with the numerous enemies he has been making in the past year or so.

While busy attending to this ‘important mission’, how can he spare the time working on how to properly govern the territory? He has not only proved himself to be an utterly worthless person, but also someone who is totally incompetent.

His biggest goal, and the biggest nightmare for the Hong Kong people, is crushing the One Country, Two Systems principle and transform Hong Kong into just another mainland city. This means the absolute erosion of our core values and way of life. The damage he has done to us since his appointment has been nothing short of phenomenal.

It is now beyond any doubt that the mainland authorities must have realized that they had made the wrong choice. That is why, despite the government’s weakest denial, the Secretary for Transport and Housing Anthony Leung, the Secretary for Finance and Treasury Chan Ka Keung, and Secretary for Commerce and Economic Development Greg So must have been summoned to Beijing during 689’s visit to answer directly to the Chinese leaders.

It looks like 689 will not last very long as our chief executive. However, it is not time to rejoice yet. Until we have a truly free, democratic society based on the rule of law in both the mainland and Hong Kong, we will never be able to lead a life that is free of fear and oppression.