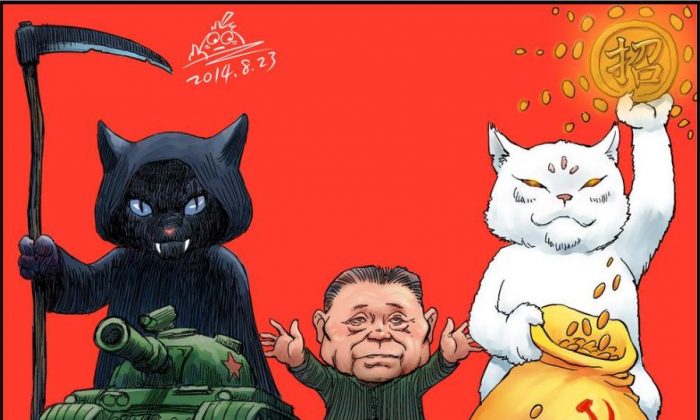 Editor’s note: China’s rapid economic growth over the past three decades began with a privatization process pushed forward by former Chinese Communist Party leader Deng Xiaoping. Following the decade of extreme political oppression during the Cultural Revolution, Deng presented his famous “Cat Theory” to propagate his introduction of a capitalist market economy. The theory states: “It doesn’t matter if a cat is black or white; as long as it catches mice, it’s a good cat.” In essence, the “black cat” and “white cat” stands for “planned economy” and “market economy,” and Deng was saying that whichever one gets the job done will be adopted. However, more than 30 years after Deng’s proclamation, with China’s economy in the doldrums, massive government corruption, and extreme social inequality, many now question China’s economic model. The following blog article is an example.

In Deng Xiaoping’s home, there is a painting called “Two Cats” by renowned painter Chen Liantao. An inscription in Chinese calligraphy says:  “It doesn’t matter if a cat is black or white; as long as it catches mice, it’s a good cat.”

In 1985, Deng was voted “Man of the Year” by Time magazine. The white cat, black cat theory was also featured in Time magazine. That year, Deng’s “Cat Theory” spread from China to the world. Since the Third Plenary Session of the 11th Communist Party’s National Congress, the “Cat Theory” has become the theoretical mark of China’s transition to economic development.

Cats are born to catch mice. Human beings have human nature, without which people are not humans. But humans also have a selfish side, a tendency to look after their own self-interest. Almost everyone wants to get rich, from the emperor to the common people.

Enterprises share the same nature in terms of market competition. The impulse to “catch mice” is completely different in private enterprises and in state-owned enterprises. Private enterprises are driven by a strong impulse of self-interest, similar to the nature of a wild cat. State-owned enterprises are different, because “catching mice” is not directly related to “eating mice.” Therefore their nature has changed. For example, Chu Shijian created the Red Pagoda cigarette kingdom that paid tens of billions of yuan in taxes each year. But in the end, Chu was sentenced to decades of imprisonment just for stealing a “small fish.” The Chinese communist regime made the cat look at the fish, but didn’t allow the cat to eat.

Allowing All Cats to Catch Mice

Why can some cats catch mice, but others cannot? In a given social environment, it depends on whether they are allowed to do so, or which ones are allowed to do so. All cats have the nature to catch mice. But if some cats are locked up in a cage, they cannot catch mice. From this perspective, the statement “regardless of white cat or black cat, the cat who catches mice is a good cat” is a false proposition.

The same is true for a profitable industry. Take the financial industry for example, it is easier for state-owned capital to enter the field, but very difficult for private enterprises to enter. Is it that private enterprises do not know how to manage their finances? Of course not. In order to protect “state cats,” some “wild cats” are not allowed to catch “mice.” In an unequal market environment, it is not possible to know which cat is a good cat.

Not All Rich Cats Were Good Cats

White cat or black cat, those who became rich first were not necessarily good cats. Letting some people get rich first was a strategy of the “Cat Theory.” This strategy enabled some people in China to become world-class tycoons. It also made China grow into the world’s second largest economic power. However, not allowing white cats to catch mice made black cats become very large. After black cats became rich, they did not have the intention to let white cats join them in catching mice.

In the three decades after China’s reform, the vast majority of rich Chinese entrepreneurs and tycoons have benefited to a certain extend from this inherent injustice in the system. The reason you caught mice was not because you were more capable than Jack Ma, but because you were allowed to do so by your master.

For a long time, a dangerous economic policy tendency has prevailed: the introduction of “demand side” or “supply side” policies. These ended up furthering the interests of a few people by letting them reap profits. In fact, many times polices were made to benefit the entire population, but they often ended up benefitting only a small number of people. This is the reality.

The “demand side” and “supply side” reforms developed by western economies are unable to unlock China’s economic gridlock. The real issue of the Chinese economy is that its mechanism of “distribution” is degenerating. It cannot regulate the fair distribution of social benefits. The “distribution side” of the machine has rusted and shut down. In fact, it is accelerating the process of the wealthy getting richer, and the poor getting poorer.

In the past, we used to refer to dysfunctions in the distribution system as a problem of income distribution. In fact, this is a one-sided view. In today’s Chinese society, the ways to become wealthy are diversified, with income being only one of the channels and no longer the main channel. Regardless of how rich the wealthy are, who became rich through labor income? Very few.

Having the majority of people become rich cannot be limited to labor income. Income from labor is limited. One needs knowledge, capital, human relationships, and opportunities. For example, if a small shopkeeper wants to open up a shop or expand his business, he needs liquidity. Getting the capital is critical for him. Without capital and relying only on savings from his income, he may not be able to achieve his dream of opening a shop.

Financing opportunities are related to the distribution of capital, access to knowledge and education. Opportunities to accumulate wealth are related to social equality and fairness. How a society distributes resources equally among all members of society is not only an issue of income distribution, but also an issue of fair competition. Without fair competition, opportunities are controlled or monopolized by a few people and society will accelerate the polarization of wealth.

Why are black cats fatter than white cats? It is not because there is a difference in their genes, or that black cats are smarter, more capable, or work harder. The problem resides with the owner.

Fan Di is an independent economist and part-time professor of Peking University and Sun Yat-sen University. He obtained a Ph.D. at the University of California, Berkeley, supervised by Li Yining of Peking University and Nobel Prize winner George Arthur Akerlof. Fan has been a senior executive and consultant at major banks, financial firms, and large companies. This is an abridged translation of an article posted on Sept. 9, 2016 on his public WeChat account.