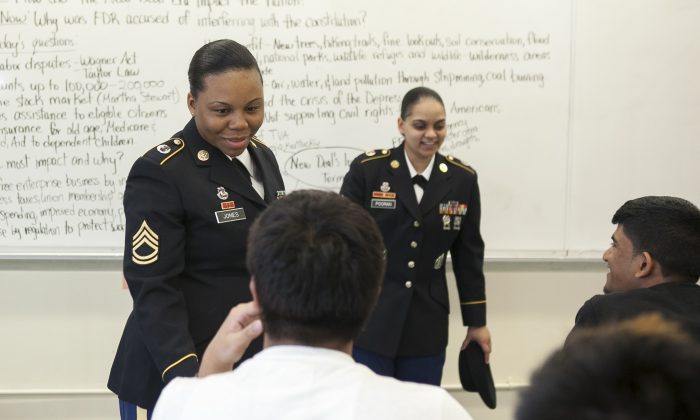 NEW YORK—A dozen young people in their sweats lined up on a track field in Queens a drizzly Thursday afternoon.

“Push ups. Go!” a sturdy figure of a sergeant commanded. The group fell to the ground, commencing the exercise. “Those are push ups?” another officer chipped in.

Most of the teens were black and Hispanic males. Some were lifting their body with skill, while others struggled to keep the posture.

Those were our Future Soldiers, as the Army calls them, or recruits, as they are called in other branches of the military. Some signed up to get themselves through college, some seek the preference for veterans in applying to the police force, some just seek the experience. Many just finished high school.

Joining the military right after high school is quite common. People under 21 make up some 20 percent of the Army or close to 100,000 soldiers. The Army school recruitment tactics are a strong part of the formula.

About 10 years ago “the Army re-evaluated its recruiting approach and became more community focused,” according to Tina Beller, public affairs specialist of the U.S. Army Recruiting Battalion of New York City.

The Army said that these initiatives are meant to prevent obesity, failure to graduate, and tainted criminal records—the main reasons young people can’t join the Army in the first place.

“Fewer than one in four 17–24-year-olds are fully qualified to join the Army,” Beller said.

But some are concerned that the less the initiatives are related to actual recruitment, the more manipulative they are.

“Advertising is notorious for either simply ignoring, downplaying, or lying about the negative features of whatever the product is,” said Allan Kanner, Berkeley psychologist and co-founder of the Campaign for a Commercial-Free Childhood, a nonprofit focused on “limiting commercial access to children.”

In 2005, the Army signed a five-year contract worth $1.4 billion with McCann Erickson, a behemoth advertiser that created campaigns for corporations like Coca-Cola, Exxon Mobil, and Pfizer.

Kanner thinks it’s unethical to allow the Army to use sophisticated marketing strategies to convince minors into major life decisions. “The marketers might try to sell junk food, but the Army is trying to sell its product, which is recruitment,” he said.

“To effectively work the school market,” the handbook advises, recruiters must first gain the trust of the school personnel and “must convince them that you have their students’ best interests in mind.”

“They don’t look at us as Army recruiters, but see us as neighbors,” said Sgt. 1st Class Meagan Jones during her regular visit to the Thomas A. Edison Career and Technical High School in Queens.

She and Staff Sgt. Kareshma Pooran, both recruiters at the Army Career Center Jamaica location, are welcome in the school. The staff greets them warmly. Students don’t shy away.

While not every school buys into the influence, the Army earned its place in Edison High, according to John Rullan, the school’s coordinator of career and technical education programs.

“I’m very particular about who I have speak to my students,” Rullan said. “Sometimes the kids feel that you’re coming in only to get them to join. … A lot of kids are against it.”

He had a bad experience in the past. A student came back saying that what the recruiters said was very different from what was actually going on in the military. But with all the help the Army provides the school “They’re just becoming a part of the school culture,” he said.

The End of a Trend

Army Career Center Jamaica has done well so far, enlisting about 10 people a month, adding to this year’s goal of some 75,000 active duty and reserve personnel nationwide.

The economy also plays into the Army’s hands. “It definitely does help,” Jones said. In 2009, amid the recession, the Army broke its recruitment goal by more than 6,000, a number unseen in the five years before or after.

Yet that era may be coming to a conclusion. “We recognize this trend will be unsustainable as the economy continues to improve and competition to draw recruits from a small, qualified talent pool, who are alarmingly less inclined to choose a military service as a career, increases dramatically,” said Brig. Gen. Gina Grosso, the leader of the Air Force Recruiting Service in January.

In line with the need, the Army brands itself as a career broker, offering 150 different jobs. Combat specialties make up almost 30 percent of the jobs. Even medical or technical personnel, some of the most demanded Army positions, can be deployed in war zones.

The risk to one’s life is still real. Less than a month ago two soldiers were killed in two separate shootings in Afghanistan. One was 20, the other 24 years old, both assigned to New York’s Fort Drum.

Presenting the military in schools ultimately boils down to having “an objective neutral party who’s qualified to tell them the downside as well as the upside,” Kanner said, suggesting that history or political science teachers, rather than recruiters, should take up the task.

Fast Facts About the U.S. Military