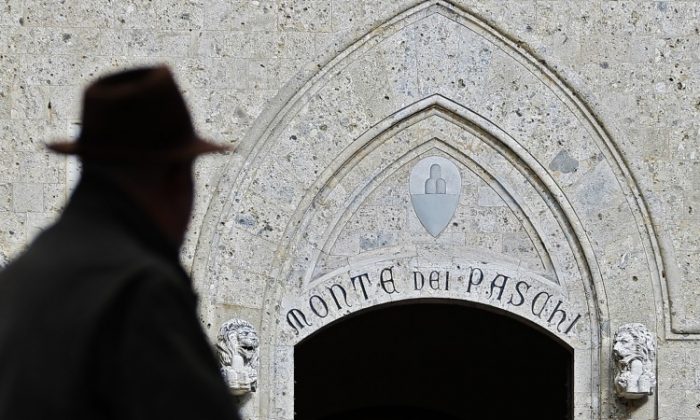 A man walks past the headquarters of the Banca Monte dei Paschi di Siena, the world's oldest bank, on Jan. 25. has to secure a €5 billion capital to survive. (Fabio Muzzi/AFP/Getty Images)
Business & Economy

The political uncertainty following the referendum and the resignation of Italy’s Prime Minister Matteo Renzi may derail the Italian banks’ quest to raise new capital.

Renzi decided to step down on Dec. 5 after nearly 60 percent of Italian voters dismissed his plans for constitutional reform.

Renzi’s government had plans to reform key institutions including the banking sector. But he was able to implement only a few of them due to a complicated legislative process.

The referendum for constitutional reform aimed to streamline the law making process by reducing the power of the Senate and giving more power to the central government.

Renzi called the result of the referendum an “extraordinarily clear” defeat for him. Now his resignation means banks cannot count on state aid to sort out their morbid finances in the near future until a new government is formed.

Italian banks’ problems started during the financial crisis of 2008. However, Italy’s chronic economic problems made it more difficult for them to recover, unlike the U.S. counterparts.

Regarding economic growth over the last ten years, Italy has been the worst performing country in the Eurozone only doing better than crisis-stricken Greece.

Compared to other European banks, Italian banks have more corporate loans and the years of poor economic activity led to an increase in bad loans.

Total non-performing loans (NPLs) at Italian banks at the end of last year were nearly 360 billion euros ($386 billion), according to the International Monetary Fund (IMF). The NPLs represent 18 percent of total loans. And 210 billion euros ($225 billion) of those loans are considered to be insolvent.

“The large volume of NPLs is mostly the result of the profound recession,” stated the IMF.

Also, like other European banks, Italian banks have weak profitability due to low-interest rates.

Italian banks also suffer from poor management and corruption. Bad practices include distributing loans to friends and family as well as forcing corporate customers to buy shares in the bank in return for loans. This practice is dubbed “kissing shares,” according to a Financial Times report.

MPS came under the spotlight during the stress tests by the European Banking Authority in July. The bank was the weakest of the 51 European institutions. The world’s oldest financial institution, founded in 1472, has to secure 5 billion euros in capital to survive.

Because of bad loan write-offs, Italian banks need a bail-out of nearly 45 billion euros ($48 billion) for the whole sector according to Italian media reports.

However, the banks may not be able to raise the money through investors, leaving the government as a last resort.

A government bail-out, however, may lead to a loss of investor confidence in Italy’s banking sector and a new eurozone crisis.

“Italy remains an economic risk—perhaps the most significant one—for the future of the euro and Europe,” Robert Kahn, an economist at Council on Foreign Relations, wrote in a report.