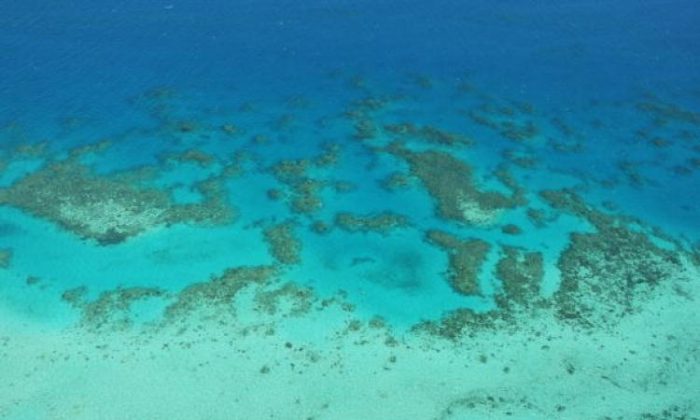 Aerial view of The Great Barrier Reef are seen off Cairns, Australia. (Phil Walter/Getty Images)
US

The impact of coastal development on Australia’s Great Barrier Reef threatens its conservation status as a World Heritage Area.

Australia’s Great Barrier Reef, one of the world’s richest and most diverse natural ecosystems, is under threat from rapid coastal development, says UNESCO.

The World Heritage-listed reef is the subject of a report released on June 1 by UNESCO, the United Nations’ cultural agency.

The ‘State of Conservation’ report summarises the findings and recommendations from a reactive monitoring mission to assess the reef in March.

According to Environment Minister Tony Burke, the Australian Government invited the mission in response to concerns raised by the World Heritage Committee about development specifically on Curtis Island, in Gladstone Harbour.

“This will be by far the largest and most comprehensive and complex assessment undertaken in Australia and it is still in the early stages,” Mr Burke said.

Australia has been given eight months to change its management of coastal development on the Great Barrier Reef; otherwise the area could be listed as a World Heritage Site in danger.

“Considering the high rate of approvals over the past 12 years, this unprecedented scale of development affecting or potentially affecting the property poses serious concerns over its long-term conservation,” says the report.

The UNESCO report stated that development within major port areas should not be permitted “if it would impact individually and cumulatively on” the reef’s Outstanding Universal Value.

While development in the Gladstone harbour has not been definitively linked with environmental degradation, many think that the linkage is obvious.

Michael Gardner, spokesperson for the Queensland Seafood Industry Association (QSIA), says “there is clearly a serious problem affecting all species of fish and other marine life as well.”

“Virtually all species of fish in the harbour are being affected by disease. Not even the catfish are spared,” Mr Gardner said.

“Sharks and rays in particular are very resistant to environmentally induced diseases but they are now heavily involved with rashes, lesions and ulceration, something that fishermen and processors have not seen here before.”

Many blame the dredging activities and toxins in the harbour’s sediment as the cause for the poor health of fish in Gladstone harbour, but extensive testing commissioned by the Queensland State Government has apparently failed to link it.

The Queensland Department of Environment and Resource Management said that while heavy metals and toxic pollutants such as dioxins and furans were found in the harbour, they were “consistent with what have been found by the National Dioxin Program in urban and industrial locations elsewhere in Australia”.

While the Queensland Government claimed this is “what you would expect to find in any industrialised or urban environment”, the fragility, uniqueness and proximity within a World Heritage area may have been underestimated.

Meanwhile the ABC reported that Queensland Premier Campbell Newman said that while protecting the reef was important, coal and LPG industry development along the coast would continue.

“We are in the coal business. If you want decent hospitals, schools and police on the beat, we all need to understand that,” he said.

Mr Newman acknowledged the UNESCO report by saying, “They are totally right, we do need a proper plan for the Queensland coast in terms of how these developments will proceed and how future ports will be developed and operate”.

UNESCO’s report found numerous “unaddressed concerns regarding the protection and management of the port and LNG facilities in Gladstone Harbour and on Curtis Island and the protection of its surrounding environment”.

With three very large LPG developments approved for Curtis Island and one more waiting for approval the possibility of the world heritage committee considering the listing the property as being in danger are very high.

What effects this will have on the Reef’s 1.6 million visitors per year and 63,000 jobs remains to be seen.