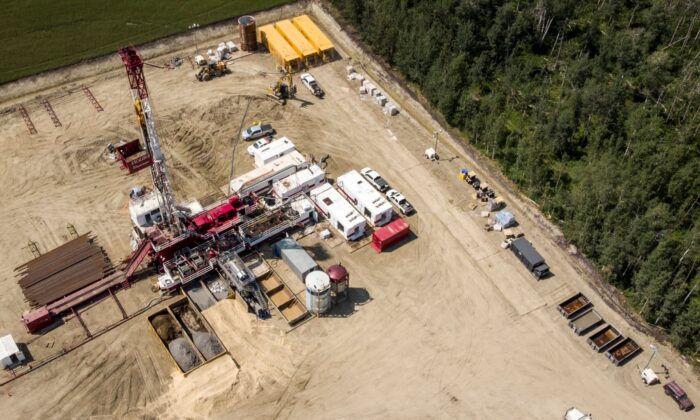 An oil drilling rig operates in a field near Cremona, Alta., on July 12, 2021. (The Canadian Press/Jeff McIntosh)
Canada

Alberta and Saskatchewan have secured a regulatory exemption from Ottawa that will allow oil service rigs to move freely between provinces, according to a Sept. 12 notice issued by Transport Canada.

In June 2019, the premiers of both provinces signed a memorandum of understanding to help remove provincial barriers imposed by federal regulations that “needlessly” restricted the movement of service rigs.

Since then, they have brought forward a joint application to Transport Canada, urging the federal department to exempt service rigs from regulations under the Motor Vehicle Transport Act that prevent the service rigs from moving between job sites in the two provinces “efficiently.”

Alberta Premier Jason Kenney said the federal exemption is a win for his province that will make it easier and faster to move the service rigs between provinces.

“Striking down service rig regulations is part of the Alberta government’s plan to reduce red tape, improve labour mobility and grow our economy,” Kenney said in a statement on Sept. 14.

“Because the federal government regulates traffic between provinces, we have been pressing Ottawa for over two years to align their rules with our pro-growth approach.”

“Western Canadian Energy is not only among the most sustainable in the world, but also among the safest. We should be removing redundant red tape and barriers that impede opportunity for growth,” he said.

The exemption was approved because oil service rigs present a “unique situation” with respect to highway transportation safety, according to the federal government.

“A service rig package operates within a limited radius or within recognized oil and gas fields, and as such, travels short distances on highway and spends 95 percent of its total operating time stationary,” the Transport Canada notice said.

Under the new Motor Vehicle Transport Act exemption, service rig convoys will not be required to complete daily logs or have a certified electronic logging device, said the governments of both provinces in their statements.

In addition, the two provinces committed that service rigs will continue to have safety checks in place, including having valid permits, regular inspections, and compliance with occupational health and safety requirements.

The exemption will apply in Alberta, Saskatchewan, Manitoba, and British Columbia.