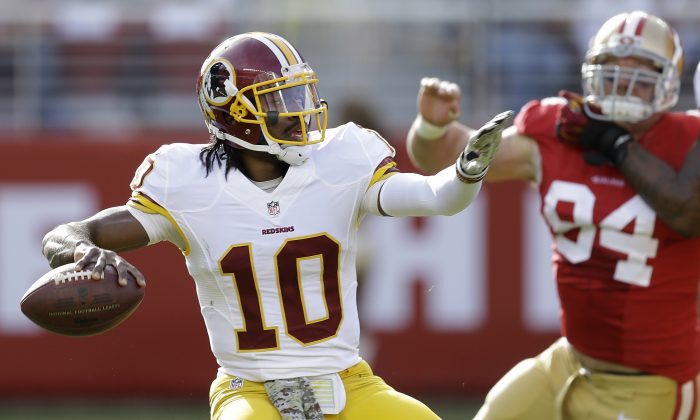 The Washington Redskins play the Indianapolis Colts on Sunday. Here’s some of the latest updates:

ASHBURN, Va. (AP) — Robert Griffin III mingled in the locker room and made small talk about shoes and food.

No sense talking about football, not when a player who once could do no wrong has been benched for the second time in two years.

The Redskins will start Colt McCoy over Griffin on Sunday against the Indianapolis Colts, the latest development in a stunning tailspin for the 2012 NFL Offensive Rookie of the Year.

First-year coach Jay Gruden said McCoy will be given “every opportunity” to hold the job for the final five games of the season.

“We’re searching for answers on offense,” Gruden said. “And it starts at the quarterback position, quite frankly.”

Now it’s a question as to whether RG3 is done for good in Washington, and whether he’ll develop the skills necessary to succeed as a pocket-passer in the NFL.

The Redskins (3-8) are 0-3 since he returned from an ankle injury and have scored only one touchdown in each of the past two games.

The former No. 2 overall draft pick seemed poised to revolutionize the quarterback position with his arm and legs when he led Washington to the playoffs two years ago, but he is 4-14 as a starter since the start of the 2013 season and has struggled to adjust his game.

So much for that.

After Redskins coach Jay Gruden announced he was making a quarterback change Wednesday, both players started cramming for Colt McCoy. The actual transition began when word first leaked Tuesday that a move could be coming, turning what is a holiday week for most of America into one filled with overtime for the Indianapolis defense.

“Before I stepped foot in here today, I had watched their last five games — RG3 had started three of the five and Colt started the other two,” Jackson said. “Now I’ve gone back and put the Dallas game on my iPad and some of the preseason games he played in.”

Jackson already has some working knowledge of McCoy, who was his teammate for three seasons in Cleveland, and the Colts (7-4) had already done most of their prep work dissecting Gruden’s offense before the official announcement.

There are still plenty of bugs still to work out.

Griffin, the 2012 NFL’s Offensive Rookie of Year, produced his best results when he could move around effectively. He hasn’t been nearly as good in that area since tearing the ACL in his right knee at the end of the 2012 season, and he’s 0-3 since trying to return from a dislocated left ankle this season.

The Colts have detected a similar style from McCoy — and better results.