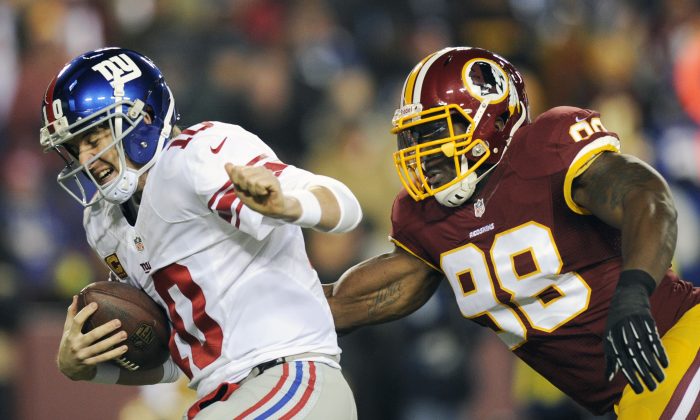 The Washington Redskins are a popular football team on the East Coast and lots of fans are wondering what the team is up to as far as acquiring new players as well as retaining current ones.

Let’s check out the latest rumors:

-Brian Orakpo may have to earn a long term deal, coach Jay Gruden said this week. He said there’s a desire to get Orakpo to stay in Washington “for as many years as we can,” but he added: “I wouldn’t mind letting him play out this franchise tag and see what happens. He’s a talented player. I think he can do a little better, we can ask more of him to where he could be more productive. … We have high hopes for Brian, and whether the deal gets done or not, we know he’ll be a big part of our success” in 2014.

Orakpo has never recorded more than 11 sacks in a season in his five years of playing. But Gruden said that the Redskins are for most part happy with him. The new coach is planning on getting Orakpo rushing the passer more, especially on third down, saying he “has the talent to get home. That’s why we franchised him. He has the speed, he has the strength, and those are two variables you have to have as a pass-rusher. We have to get them going as far as letting him rush and be himself.”

-The Redskins still want to sign Kenny Britt, the talented wide receiver who was drafted by the Titans in the first round in 2009. He’s dealt with injuries and off the field trouble over the years but is still an attractive addition. Britt has been looking at other teams and the Redskins are waiting for Britt to make up his mind, a source told ESPN.

“Last year, I’d rather keep last year in the past and things like that,” Britt told Buffalo reporters. “It came and went, and I’m here right now, so I’m trying to get this free agency over with.”

-The Redskins haven’t received any calls about backup quarterback Kirk Cousins, who wants to get traded to compete for a starting job elsewhere. Gruden wants Cousins as a backup to Robert Griffin III.