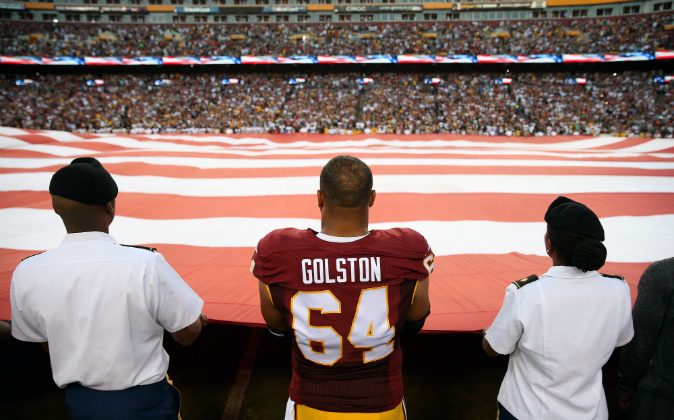 Defensive end Kedric Golston #64 of the Washington Redskins holds the American flag during the national anthem prior to a game against the Pittsburgh Steelers at FedExField on September 12, 2016 in Landover, Maryland. (Patrick Smith/Getty Images)
NFL

As NFL players continue to sit, kneel, and/or raise fists while the national anthem reverberates throughout sports arenas across the nation, the Washington Redskins took a different approach during Monday Night Football against the Pittsburgh Steelers.

A day after the 15-year anniversary of the Sept. 11 terrorist attacks, the entire Redskins team—and some Steelers players—joined armed forces on the artificial turf to help spread the 100-yard American flag over the FedExField playing field.

This is the second time the NFC East team has honored victims of 9/11 by joining military personnel on the football field, having did so in 2011 against the New York Giants. The impromptu gesture was lauded by Redskins Coach Jay Gruden.

“It was awesome, I tell you what,” Gruden told the Washington Post. “That was a bright spot. The fans came out in a big way, and the military presentation, Rob O’Neill, that gives you goosebumps all the way. The way the players took advantage, took part in it. That was fun to watch.”

Linebacker Will Compton concurred with Gruden’s point, adding that the varying forms of protest demonstrated by players—most notably Colin Kaepernick—have acted as a springboard to open dialogue that can lead to unification.

“It was pretty powerful stuff,” Compton said. “It was just cool to be a part of that. It’s cool because people are using the opportunity to come together and kind of do what they feel is right but knowing that whatever decision these players are making, it’s out of the right intention.”

He added, “The other side of it, even if it’s rubbing some people the wrong way, I think guys are doing a good job of seeing that and doing something as far as bringing people together.”

Kaepernick has insisted his goal surrounding his protests have been misinterpreted as divisive. According to the San Francisco 49ers quarterback, his intentions are to bring light to the injustices experienced by those in underserved communities.

“I have to help these communities. It’s not right that they’re not put in the position to succeed or given those opportunities to success,” he said.