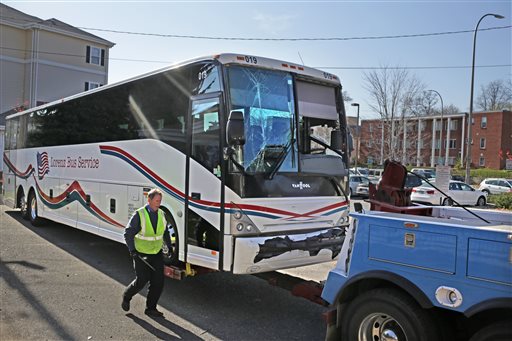 Tom Lynch of Twins Cities Towing and Recovery prepares one of two buses involved in an earlier accident for towing, Sunday, Nov. 2, 2014. Two Washington Redskins team buses collided about 8:15 a.m. Sunday morning on their way to the NFL game vs. the Minnesota Vikings, along eastbound Interstate 94 at the ramp to Huron Ave. Minor injuries were reported, authorities said, but the Redskins said no one on the team was injured. (AP Photo/The Star Tribune, David Denney)
NFL

A Minneapolis Police Department spokesman said on Thursday that the escort policy would be re-evaluated, and that police vehicles would no longer accompany NFL buses in the meantime.

The crash occurred hours before the Redskins-Vikings game on Sunday. Two buses carrying Redskins players, coaches, and staff collided when a police car ahead of them hit a guard rail. Rookie tail back Silas Redd was held out of the game with back spasms suffered from the incident, and coach Jay Gruden suffered from whiplash. The Redskins lost 29-26.

“A lot of guys had their lives flash before their eyes. Not a good moment,” quarterback Robert Griffin III said about the crash.

The Minnesota State Patrol on Thursday released a full accident report that brought to light just how the accident happened.

“The police officer positioned in the rear of the motorcade was ordered by the supervisor to pass the buses on the left as they exited Interstate Highway 94. The officer used the grass median to pass in front of the first bus but lost control as she crossed and spun into the guardrail on the left side of the ramp, blocking the roadway,” it said.

“The driver of the first bus braked to avoid the squad car, causing the second bus to rear-end the first bus and push it off the ramp to the right. The first bus swerved to the left, through the guard rail, and back onto the ramp.”

The Redskins have a bye week. Their next game is against the Buccaneers at home on Sunday, November 16.

With reporting from the Associated Press.