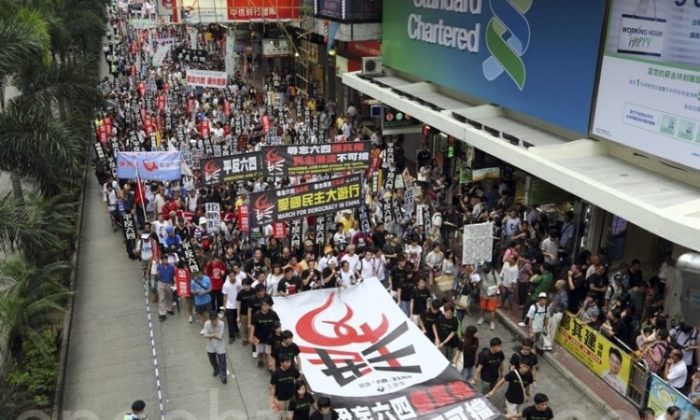 More than 2,000 Hong Kong residents participated in a march calling for the rehabilitation of the pro-democracy student protesters who were violently suppressed by the Chinese regime in 1989. Hong Kong, May 27, 2012. (The Epoch Times)
China

Hong Kong residents are preparing for the annual commemoration of the June 4, 1989, Tiananmen Square student protests and massacre.

More than 2,000 marched on May 27, calling on the Chinese regime to redress the student protesters, end its crackdown on dissidents, and do away with corruption. The march was organized by the Hong Kong Alliance in Support of Patriotic Democratic Movements in China.

A silent tribute was paid to 73-year-old Zha Weilin, who committed suicide on May 26 in Beijing to protest the regime’s long-standing refusal to address the massacre. His son, Zha Aiguo, a Tiananmen student protester, was fatally shot in the head by the Communist troops in 1989.

Zha had been a member of the “Tiananmen Mothers,” an activist group that has been calling for the Chinese regime to change its position on the 1989 pro-democracy mass protests. Most of its members are parents of murdered students.

“I believe that the rehabilitation of June 4 can be a starting point for ending China’s one-party rule. We believe that the new generation of leaders have the responsibility to promote universal and democratic values and place China among the nations walking towards democracy in this historic time,” said Lee Cheuk-yan, member of Hong Kong’s legislative council.

Lee said he was encouraged by the large number of young people participating in the march. Last year, more than 150,000 people attended the annual candlelight vigil for the June 4 victims. Lee said he was confident that there would be even more people this year.

Lee also said that they are planning to establish a June 4 museum and use it to fight against what he called the “nationwide brainwashing-type education.”

In China, the June 4 student massacre is not mentioned in textbooks and official views of the student protesters are negative.

“The Communist Party’s intense suppression shows that its members have no confidence. I hope that the people of Hong Kong can openly grieve the June 4 [victims] and fight for rehabilitation [of the protesters] as we live in the only part of China where such actions are possible. I hope we can keep doing this,” Leong said.

Miss Zhou, a student of City University of Hong Kong, is participating in a hunger strike in memory of the 1989 mass student hunger strikes in Tiananmen Square.

“We are still asking for the rehabilitation of the June 4 event, the release of jailed dissidents, and for democracy,” Zhou said.

Since March 20, a number of blocked search terms including “June 4” have been repeatedly lifted on Baidu, China’s main search engine. Articles citing a recent speech by Premier Wen Jiabao about “redressing miscarriage of justice and lifting the ban on June 4,” were among the unblocked search results.