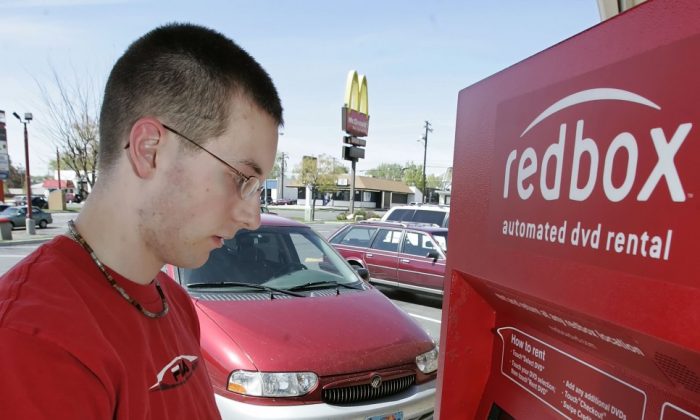 In this file photo, a customer orders DVDs from a Redbox kiosk in Prevo, Utah. Redbox and Verizon are teaming up to create a new video-subscription service. (George Frey/Getty Images)
Business

Executives from both companies offered no disclosure regarding subscription pricing, selection, or availability. However they did state that the deal would most likely entail a bundling of physical discs along with the Internet video-streaming option.

As the nation’s largest and most affordably priced DVD rental business, Redbox to date has rented more than 1.5 billion discs through 35,400 of its aptly named red-colored kiosks nationwide to nearly 30 million consumers. Volume will likely increase given the recent unrelated announcements that Redbox has agreed to purchase NCR Corp.’s 9,000 Blockbuster-branded DVD kiosks for $100 million. It will also continue to further expand kiosk locations to include Canada. Verizon has around 10 million broadband subscribers and greater than 100 million wireless customers.

Despite their seemingly ubiquitous exposure and growth, along with high brand-name recognition among consumers, both Redbox and Verizon will face steep obstacles by entering the highly contentious and complexly saturated online digital delivery market place.

Undoubtedly, facing this competitive dynamic of contenders vying for a piece of Netflix’s $476 million streaming revenue and 60 percent market-share, the success of the Redbox and Verizon’s subscription offering will hinge principally upon service differentiation.

Assuming Redbox is able to tap into Verizon’s clout and effectively negotiate with major Hollywood studios to establish a solid selection of content, securing comparable release time windows for new rental titles, at a compelling price-point, this partnership could legitimately make inroads into the burgeoning streaming market and challenge Netflix’s dominance.

There’s no word yet on the naming of the subscription service which should be rolled out to consumers around July of this year.