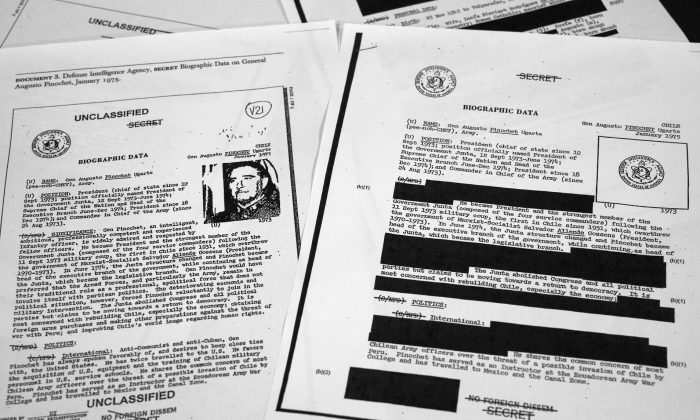 The redacted, right, and the unredacted versions of the biographical intelligence file report on Chilean dictator Augusto Pinochet from 1975 is photographed in Washington on April 15, 2019. (AP Photo/Jon Elswick)
US News

NEW YORK—Somewhere in the shadows of federal bureaucracy, there was an issue pertaining to the drinking habits of Augusto Pinochet.

The National Security Archive, an advocate for open government, had for years tried to gain access to intelligence files about the Chilean dictator, his human rights abuses and his ties to the United States. In 2003, the Defense Intelligence Agency declassified documents that included a biographical sketch of Pinochet assembled in 1975, two years after he seized power. Parts of the sketch had been blacked out, “redacted,” for national security. The archive had no trouble discovering that the missing information included Pinochet’s liking for scotch and pisco sours.

“The sketch [had] been published in full by the government in 1999,” noted Tom Blanton, director of the archive. But, he said, “all it takes to change that is a single objection.”

The censoring of government reports isn’t new, but since Robert Mueller turned in his report in March on alleged ties between Russian officials and Donald Trump’s presidential campaign, “redacted” has joined “collusion” and “obstruction” as a national buzzword. Attorney General William Barr’s announcement that he would release a “redacted” version of Mueller’s findings, expected Thursday, will likely set off a long debate about what’s behind the darkened blotches.

Barr’s stated guidelines range from protecting intelligence sources to the privacy of those not under investigation. But over the past few decades, the government has redacted everything from the most sensitive information to the most harmless trivia.

“We believe there are real secrets, common-sense secrets, like names of people in the field who would be killed or specifications of weapons of systems,” Blanton said. “But redactions also are overused.”

David Cole, legal director of the American Civil Liberties Union, said any government official who ever had a security clearance will say the same thing: Whether under Clinton, Bush, or Obama, “the problem of overclassification is rampant.”

“It’s partly the consequence of what is safest for the government to do,” Cole said. “If you make a mistake and disclose something you shouldn’t have, that mistake is public. If you decide to keep something secret that doesn’t need to be secret, that mistake is private.”

The secrecy reflex is as old as the country: The U.S. government itself was created behind closed doors, and windows. Framers of the Constitution gathered at the Pennsylvania State House from May to September in 1787 and, anxious to speak freely, were so resolved to keep the public away they kept windows shut (in pre-air conditioned times) even on the hottest days. No official transcripts were logged, and much of our understanding of the debate has been shaped by James Madison’s (revised) notes, which didn’t come out until 1836, after Madison and fellow delegates were dead.

“I think they are pretty reliable,” historian Gordon Wood said of Madison’s notes. “But they may only account for a fraction of what was said at the convention.”

At the time of the Constitution’s drafting, there was no system for classifying government documents and no process for the public to obtain them. Our redaction nation formed over the course of the 20th century as the federal government expanded, the country became an international superpower, and means of communication and surveillance grew more sophisticated. By the start of the Cold War, just after World War II ended, new bureaucracies such as the Central Intelligence Agency and the National Security Council were defined by what they couldn’t, or wouldn’t, reveal.

“In 1947, when you have creation of the CIA and the NSC, you have the production of literally billions of papers and billions of secrets contained within them,” said Tim Weiner, whose “Legacy of Ashes: The History of the CIA” won the National Book Award in 2007. “And the machinery of secrecy far outstripped the ability to demand an open government.”

For years, the general public had few means to request records, and little awareness of how much it wasn’t being told.

The Freedom of Information Act wasn’t enacted until 1966, and broad demands for accountability only began with the jarring revelations of the 1970s: years of official deceit about the Vietnam War as detailed in the Pentagon Papers; the Watergate scandal which forced President Richard Nixon to resign; the Senate’s Church Committee of 1975–76, which confirmed reports of the government’s history of backing the assassination of foreign leaders.

Ever since, it’s been an exhausting process of keeping up.

Names and events change, whether the assassination of President John F. Kennedy or the torture of prisoners during the Iraq War, but millions of documents each year continue to be classified. The NSA and others have even compiled lists of some of the more unlikely information to be withheld:

—Some files from World War I, including a method for opening sealed letters without detection and a formula for German secret ink, were not declassified until 2011. “When historical information is no longer sensitive, we take seriously our responsibility to share it with the American people,” CIA Director Leon Panetta said at the time. (The release followed years of lawsuits and formal requests).

—The redaction in 2014 of remarks about the Cuban Missile Crisis made 50 years earlier by Soviet leader Nikita Khrushchev. The remarks were made in a public speech.

—FBI files about Marilyn Monroe’s alleged communist sympathies were redacted until 2012, 50 years after her death and more than 20 years after the Cold War ended.

Sometimes, history itself is censored. Daniel Ellsberg, the former defense department analyst famous for leaking the Pentagon Papers, remembers the long process to make all of the documents public. The Pentagon Papers were a Defense Department-commissioned study about U.S. policy in Vietnam from 1945–67. It took decades, long after the Vietnam War ended, for the full report to come out. When it did, Ellsberg noticed that one of the sections originally redacted referred to the so-called Haiphong Massacre of 1946.

“The French attacked Haiphong and killed 6,000 people,” Ellsberg says. “The entire reference was whited out. The government didn’t want people to know that an ally was seeking to conquer and colonize Vietnam.”