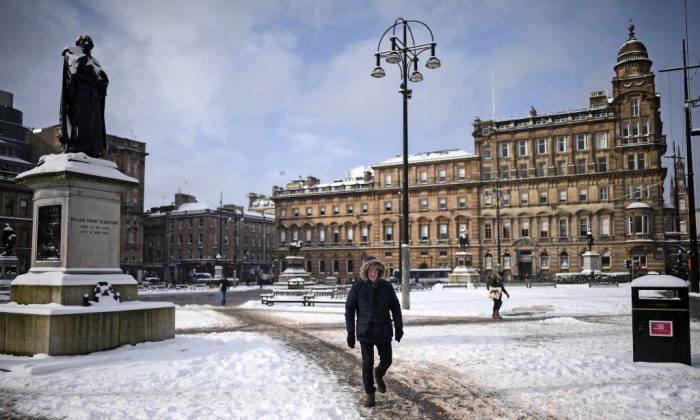 Members of the public make their way through the snow on Feb. 28, in Glasgow, Scotland. (Jeff J Mitchell/Getty Images)
UK

The highest level weather warning has been issued for Scotland as the “Beast from the East” brings extreme snow and ice.

Five centimetres of snow is expected to fall in one hour in some regions, and authorities are warning communities could be cut off for several days.

The red warning, issued by the Met Office just before midday, was issued for 3 p.m. today to 10 a.m. tomorrow. It covers the following areas: Central, Tayside & Fife, SW Scotland, Lothian Border, and Strathclyde.

“Heavy snow showers and drifting of lying snow in the strong easterly winds will become more widespread across the area later on Wednesday afternoon, through the evening and overnight into Thursday,” the warning states.

“Roads will become blocked by deep snow, with many stranded vehicles and passengers. Long delays and cancellations on bus, rail, and air travel are expected. Some communities could become cut off for several days. Long interruptions to power supplies and other services.”

Britain is currently in the grip of a Siberian weather system that has been dubbed the “Beast from the East”, with weather warnings across most of the country for the next few days.

More than 450,000 pupils have been given the day off school, according to the BBC.

The Met Office warned of significant drifting of snow as strong easterly winds pick up.

“Snow showers already affecting the area will become heavier and more prolonged later on Wednesday afternoon and at times through the evening and overnight period, with 5 cm of snow falling within an hour in some places and lying snow reaching 20-30 cm and possibly 40 cm in a few places by mid morning on Thursday.”

“If you are at work & in the Red warning area, you should try and get home before 3 pm when the weather warning is due to kick in,” he said in a tweet. “Heed Police & our advice, avoid travelling!”

I'm at our Control Centre & blizzard conditions have made the Forth Bridges disappear!

If you are at work & in the Red warning area, you should try and get home before 3pm when the weather warning is due to kick in.