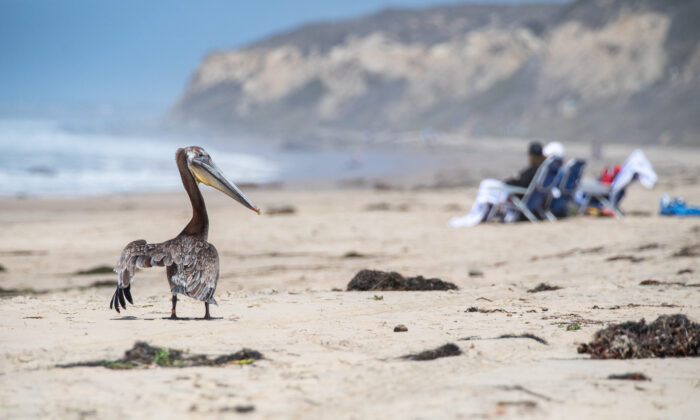 NEWPORT BEACH, Calif.—A “red tide” algae bloom off the coast of Newport Beach is not particularly toxic to humans but can cause hypothermia and death in birds, according to a marine biologist studying the case.

The Wetlands and Wildlife Care Center in Huntington Beach alerted the public to the Newport Beach area’s red tide April 25.

“Red tides are dangerous for everything in the water,” Debbie McGuire, executive director of the care center, said in a news release. “If you see a bird or other animal in need of assistance, please contact Animal Control and notify a lifeguard nearby.”

The organization is on standby to receive and care for any animals affected by the red tide, McGuire said.

David Caron, an expert in marine sciences and University of Southern California professor at the Department of Biological Studies, told The Epoch Times algae blooms are fairly common along the California coast.

However, this bloom contains some materials that can affect bird feathers and cause harm.

The blooms come and go in their own timeframe and can last from a week to a few months. However, the red tide near Newport Beach has appeared much sooner than usual, according to Caron.

“We’re actually seeing this one fairly early now,” Caron said. “It’s very difficult to predict the real details of when it’s going to show up which organism is going to bloom, and it’s not easy to predict how long it will stay.”

One reason for the algae growth off the coast of Southern California could be coming from the human wastewater dumped into the ocean, according to a UCLA study released last year.

Cities along the coast continue to dump nitrogen-rich treated wastewater deep into the ocean. When the wastewater rises to the surface, it replaces ocean water that has been pushed away by wind, a process called “coastal upwelling,” according to the study.

Caron said the activity contributes to about 50 percent of the problem.

“I would say that, yes, we are probably contributing to the issue but there’s no direct and definite link that we are the only source of [the algae blooms],” Caron said.

During the Monterrey event, birds were covered in a slimy yellow-green material on their feathers, which were saturated with water, causing them to become severely hypothermic, according to a USC study (pdf).