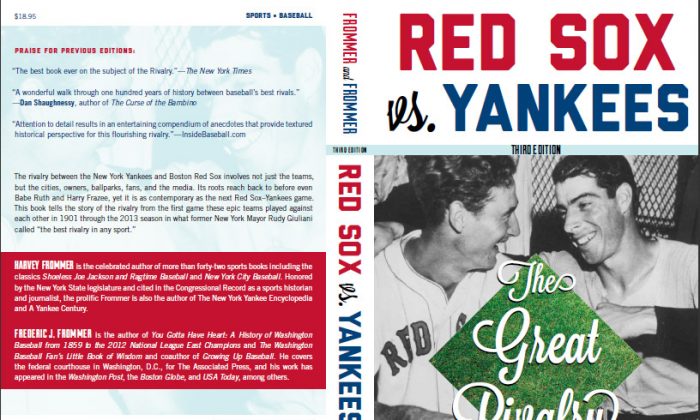 The roots of the rivalry extend all the way back to the first time the teams faced-off on May 7, 1903 at the Huntington Avenue Grounds in Boston. They weren’t the Yankees and Red Sox then but instead had more geographically correct names: the Highlanders—they played on the hilly terrain of upper Manhattan; and the Pilgrims—in tribute to their New England heritage.

Boston won that first game, 6-2 as well as baseball’s inaugural World Series that year. New York finished fourth, 17 games off the pace. In 1904, Boston won another world championship, and through the first 19 years of its existence continued to be one of baseball’s most successful teams.

It was damp and chilly throughout New England for most of the spring of 1912. Boston fans hungered to break in their new ballpark against their rivals from New York in decent weather. It took a few tries before that happened.

On April 9th, the Red Sox and Harvard’s baseball team faced off in an exhibition game in football weather “with a little snow on the side,” as one who was there said. Before but 3,000 braved the elements, Boston won, 2-0.

The scheduled official Opening Day match on April 12th, however, was rained out. Finally on April 20th, there was a bit better weather. Fenway’s first major league game: the Sox versus the Yankees (then known as the Highlanders because they played on higher ground in the Bronx), was on tap. A crowd of 27,000 showed up. Soggy, sad looking grounds greeted them and infield grass transplanted from the Huntington Avenue Baseball Grounds, the team’s former home.

Boston Mayor John “Honey Fitz” Fitzgerald, whose grandson would become the thirty-fifth president of the United States, threw out the ceremonial first ball. “Honey Fitz” did not like the Highlanders. He was an active and ardent member of the “Royal Rooters”—a group of Red Sox fans who staged pre-game parades most of the time singing “Tessie” and “Sweet Adeline.”

The game (opening day at brand a brand new park, New York against Boston) would have been the stuff of front-page headlines in New England newspapers. But six days earlier the news of the sinking of the Titanic on its maiden voyage and the loss of 1,517 lives, was still eclipsing all other stories.

Owner General Charles Henry Taylor, a Civil War veteran and owner of the “Boston Globe,” had decided back in 1910 to build a new ballpark in the Fenway section bordering Brookline Avenue, Jersey Street, Van Ness Street and Lansdowne Street. It cost $650,000 (approximately $14 million today), and seated 35,000.

An appealing red brick façade, the first electric baseball scoreboard, and 18 turnstiles, the most in the big leagues were all talked about. Concrete stands went from behind first base around to third while wooden bleachers were located in parts of left, right, and centerfield. Seats lined the field allowing for excellent views of the game but limiting the size of foul territory.

Elevation was 20 feet above sea level. Barriers and walls broke off at different angles. Centerfield was 488 feet from home plate; right field was 314 feet away. The 10-foot wooden fence in left field ran straight along Lansdowne Street and was but 320½ feet down the line from home plate with a high wall behind it. There was a ten foot embankment there to make viewing of games easier for overflow gatherings. A ten foot high slope in left field posed challenges for outfielders who had to play the entire territory running uphill.

This was the Opening Day Lineup for the 1912 Boston Red Sox.

The Sox nipped the Yankees, 7-6, in 11 innings. Tris Speakerdrove in the winning run for the home team. Spitball pitcher Bucky O’Brien got the win in relief of Charles “Sea Lion” Hall. New York’s Harry Wolter smacked the first hit in the new park.

Umpire Tommy Connolly kept the ball used in that historic game, writing “Opening of Fenway Park” and brief details of the game on it. And that was how the storied and stormy Red Sox Versus Yankees Great Rivalry started. It has never ended.