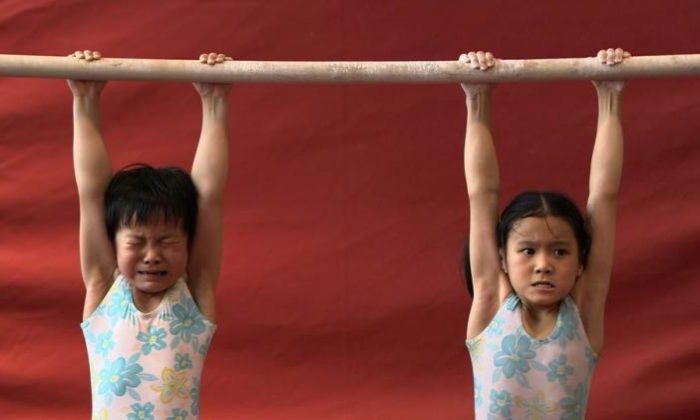 PAINFUL TRAINING: A scene from the film “The Red Race,” which documents the grueling training required for young gymnasts in China. The training includes humiliation, harsh criticism, and constant pressure to become champions. (Courtesy of Chao Gan/Red Race)
Entertainment

CALGARY—As the 2008 Beijing Olympics fade from the forefront of our attention, a documentary at the Calgary International Film Festival opens a porthole on life inside China’s gymnastics training camps.

The Red Race, which won a Special Jury Mention in the American Film Institute’s Silverdocs Festival in June, is shot in an observational style with a focus on the Lu Wan District Youth Athletic School in Shanghai.

Although neither the ages nor the names of the coaches and students are mentioned, the story revolves around the training of very young male and female gymnastics students who appear no older than 10, and possibly as young as 6.

Many of the children come from rural provinces or from the countryside and live with relatives or surrogate caregivers. They start their days with short classroom studies before beginning training by 9:30 a.m. and finishing around dusk every day.

With unrelenting pressure to become champions laid firmly on their shoulders, the children endure harsh training complete with humiliation and criticism as they practice their routines and maneuvers to the harsh bark of their taskmaster coach’s commands.

The most toxic is the girl’s coach, who is unable to utter a single kind word to her young students. She routinely pulls the girls by the arm into position or off the balance beam, and she kicks their feet out from under them when they make mistakes during the floor routines.

Viewers are left to wonder: how much harsher the environment is when the cameras aren’t present?

In fact, no mistake is too small for the coaches to criticize, and the students are constantly in tears. But this doesn’t soften the coaches’ hearts. In fact, the closest thing to a kind word most of the kids hear is: “Since you like crying so much, you can stand here and practice crying.” Their only form of positive reinforcement is candy served as snacks.

The Red Race further sheds light on the recruitment of athletes as the men’s coach has a meeting with a young boy and his mother. The coach praises the boy as being well suited to gymnastics because he is full of energy and very active. The boy’s mother resists because the child is already enrolled in a dance class and she thinks gymnastics is too tough on a youngster.

Without missing a beat, the coach tells her that gymnastics is “just for fun.” After watching what the children are actually subjected to, this scene evoked jeers and laughter from a mostly Western audience.

The pressure on Chinese athletes to succeed and become gold medalists is illustrated clearly in one scene as a bronze, silver, and gold medal from a regional event are placed at the front of the classroom and the female gymnasts are asked to draw pictures of gold medals.

The children draw a variety of pictures of their family, friends, animals, and plants, encased in large circles. They then are asked to hold their pictures up for scoring by their teacher.

In a formal fashion, the teacher picks the bronze medalist first, telling her, “Maybe you will do better next time,” as she places the medal over her neck and has the student bow to the classroom in thanks. Next comes the silver medal, or as the teacher puts it “the second bronze medal.”

Finally, the gold medal is awarded, and the winner is asked to give a speech about her achievement before being exhorted by the teacher to win even more medals in the future.

As the film progresses, it becomes clear that the enormous pressure on these children is not solely the fault of their harsh coaches but also of their parents, extended family, and the overall societal culture.

One of the less talented young gymnasts is shown visiting his ill mother in the hospital. She tells him that he needs to train and study harder, and blames him for the fact that she is sick. While offering no warmth or nurturing, she reminds him that he is the family’s hope because they are immigrants to Shanghai who have no money.