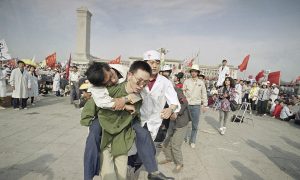 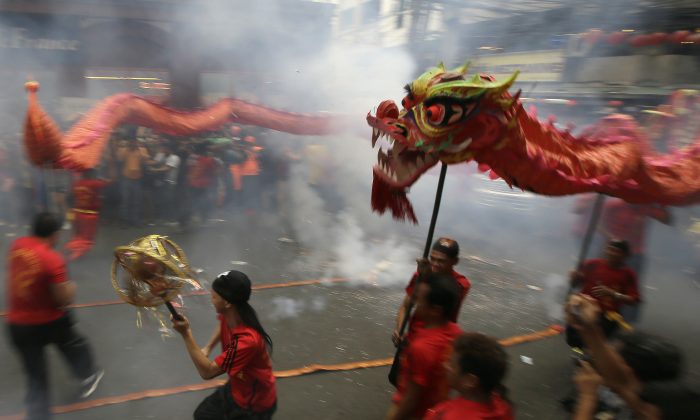 Dragon dancers perform in front of a supermarket at Manila's Chinatown district of Binondo to celebrate the Chinese New Year Thursday, Feb. 19, 2015 in Manila, Philippines. This year marks the "Year of the Sheep" in the Chinese Lunar calendar. (AP Photo/Bullit Marquez)
China

On Chinese New Year, the color red is splayed across displays and banners throughout the world. It is a looming presence at festivities, often accompanied by an accent of gold.

Unbeknownst to many, the garish use of red is a modern alteration to Chinese traditions that only came about after 1949, when the communists popularized it as a symbol of bloodshed.

In ancient China, the color red was used sparingly to accentuate details. Even the Han Dynasty, which was associated with the element of fire, did not wear out the color, according to Dr. Zhang Tian Liang, who teaches Chinese history at Fei Tian College in upstate New York.

The Chinese Communist Party has overused it in every aspect of Chinese society in the same manner it spreads its propaganda, according to Dr. Zhang.

Today, people gather to watch red dragon dancers perform to drum beats during the holidays and hang calendars filled with red, while not consciously noticing the political subtext of the excessive use of red.

“In mainland China, red is not just a color,” said Dr. Zhang. “It’s a symbol for the Communist Party—so when you’re using it, it’s a subtle implication that you agree with the regime.”

For instance, from a young age, schoolchildren in China are compelled to wear red scarves in fealty to the regime. And the people who violently destroyed Chinese culture during the Cultural Revolution in the ’60s and ’70s called themselves the Red Guard.

The “Nine Commentaries on the Chinese Party,” a book first published as a series that ran in the Epoch Times, makes a statement in Commentary Eight about the color red: “The red flag is understood to be red for having been ‘dyed red with martyrs’ blood.’ The Party worships red due to its addiction to blood and carnage.”

The worship of blood can even be found in communist North Korea, whose longest-running production is the “Sea of Blood” opera performed by the Sea of Blood Theatrical Troupe about the mass killings of Koreans under Japanese occupation.

And as a form of critique, Nobel Peace Prize-winning Chinese poet and dissident Liu Xiaobo uses red in his poem “Experiencing Death” to describe the violence of the Tiananmen Square massacre in 1989. State-owned tanks rolled in and opened fire on close to 3,000 students, according to the most recent research.

“Peaceful petition, hands unarmed/ an old man’s cane, a child’s torn jacket,” Liu wrote from prison in China in 1990, “The executioner will never be swayed / Eyes burnt to red /Gun-barrels shot to red / Hands dyed red.”  Liu remains in prison to this day for “inciting subversion to state power.”

Milene Fernandez contributed to this report.